To celebrate World Theatre Day we have the story of an East India Company sea captain performing the title role in Richard III at the Theatre Royal Drury Lane on 17 January 1803.

Captain James Peter Fearon was born in London on 17 February 1773, the son of two well-known actors, James Fearon and his wife Mary. James Fearon died at Richmond aged 43 on 30 September 1789, leaving a widow and eight children between the ages of sixteen and nearly one.   Benefit performances were held in theatres to raise money for the family, with the Duke of Clarence contributing 20 guineas.

Eldest son James Peter was serving as a midshipman on the East India Company ship Queen at the time of his father’s death.  Perhaps an influential patron with whom his father had come into contact had helped to place the boy in a potentially lucrative career?  James Peter progressed steadily upwards through the ranks of ship’s officer, and was appointed captain of the East Indiaman Belvedere for her voyage to China from May 1801 to September 1802.

His brothers also secured positions with the East India Company. Peter Fearon was appointed an officer cadet in the Bombay Army in 1799, and John Douglas Fearon was a cadet for Madras in 1807.  Two of his sisters became the wives of Company men and a third married a Royal Army officer in India. 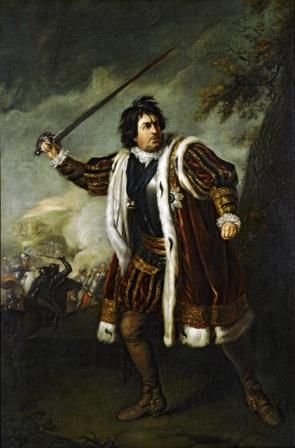 Captain Fearon’s theatrical debut as Richard III was well-received by the large number of sailors in the audience and by the press.  He gave the performance twice more in January.  The Monthly Mirror believed that he could have a stage career as there was ‘much genius’ in his performance notwithstanding the blemishes. His voice was described as ‘uncommonly powerful, but not so melodious’ and he was praised for his ‘freedom of deportment, confidence, feeling, and unabating spirit’. However Fearon was criticised for hurrying through many of the most significant soliloquies as if he did not understand their meaning: ‘He appears, throughout, to be running a race with the character, and frequently gets the start of it’. The Morning Post wrote that the Captain’s face was capable of very little variety of expression, yet he had the great recommendation of being no imitator but a truly original Richard.

This triumph was followed on 9 February 1803 with Fearon’s appearance at Drury Lane as Shylock in The Merchant of Venice.  Sadly this performance to a meagre audience was not well received. His portrayal of ‘deep and gloomy malignancy’ was described as feeble.

Captain Fearon was facing financial ruin as he trod the boards. He was declared bankrupt in February 1803. He was subsequently licensed as a free mariner by the East India Company and sailed for Bombay in 1807.  In another change of career Fearon purchased the Bombay Gazette in 1810, but this appears to have been an unsuccessful venture.  James Peter Fearon was living as a mariner in Calcutta when he died at sea in 1821. His will was proved in India, leaving his property to be divided between his mother and sisters.

Philip H. Highfill, Kalman A. Burnim, and Edward A. Langhans, A biographical dictionary of actors, actresses musicians, dancers, managers and other stage personnel in London, 1660-1800 (1973-1993)

Find my Past for the Fearon family in India -