In the late eighteenth century the native Beothuk people abandoned the coastlines of Newfoundland and moved inland to avoid contact with strangers. However, by 1818, small groups had started to venture down into the coastal settlements and take food from the storehouses.  In March 1819, one victim of these raids gathered a band of men and ventured up river to recover his property. The men came upon three natives a little distance from their wigwams. A native man attacked the group in such a manner that one of their number, John Peyton, was forced to shoot him dead.

A native woman, who afterwards appeared to be the wife of the dead man, did not flee or shed tears. Instead, she went to the murderer of her husband and clung to his arm as if for protection. From then on, she harboured a strange attachment to John Peyton. To him she was full of gentleness and affection, and the last act of her brief eventful history was to remove a ring from her finger and beg it be sent to him. 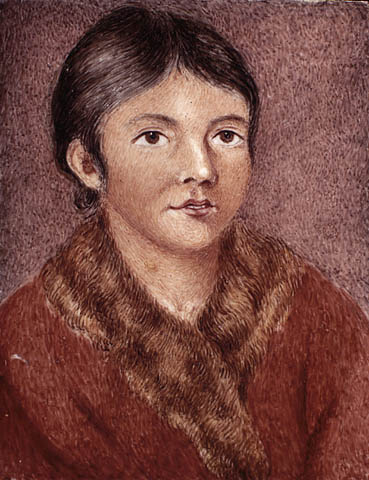 The woman became known as Mary March (native name, Demasduwit or Waunathoake). She placed herself on the sled the men had brought, and calmly held her legs out straight for someone to tie her moccasins! The attention she appeared to habitually expect, and her lack of acquaintance with hard labour, indicated that she was either a woman of a superior station, or that the Beothuk people treated women very differently to most tribes.

Mary is described as elegant, strikingly beautiful, with large eyes, healthy skin and perfect white teeth. Her voice was “remarkably sweet, low, and musical”. When brought to the European settlement, Mary was sent to live with the local missionary Mr Leigh. There she had a room and a chest in which she liked to store knick-knacks given to her by the Europeans. One day Mr Leigh discovered a quantity of blue cloth and his nightcap had gone missing. Upon searching in Mary’s chest, he found the cloth converted into 16 pairs of moccasins, and his nightcap converted into two pairs of children’s stockings. From this, the settlers deduced that Mary had two children, and shared her wigwam with 16 family members.

Mary had a mischievous habit of surprising Mr Leigh. She took great joy in sneaking up behind him quietly and making him jump! She also found the idea of unmarried men to be a most ridiculous and hilarious notion. On one boat trip to the city of St. John’s, Mary mocked Mr. Leigh and John Peyton for being unmarried, saying “You go shore Mr Leigh, you go shore John Peyton, when you go shore, no women!” and promptly burst out laughing. 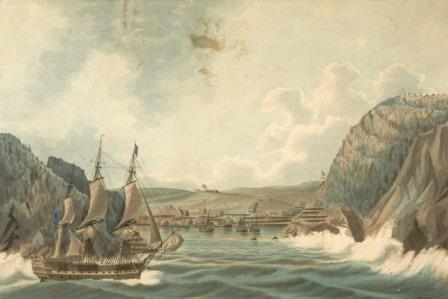 After approximately six months, Mr Leigh and John Peyton decided that Mary should be returned to her people. She stayed in the city of St John’s for a short time, and acquired enough English that the settlers hoped of opening up a dialogue with the natives through her. However, common European diseases often proved fatal to the natives. Mary left the harbour at St John’s with a cough and died of consumption on 8 January 1820 just a few miles from her home. She was aged twenty-four. The captain of the ship on which she was carried continued and found her tribe’s wigwams empty. Mary’s body was laid in a coffin filled with the objects she had collected from the settlers, and placed on the shore where her tribe could find her.

Further reading:
"Vocabulary of the Language of the Natives of Newfoundland, procured by the Rev. J. Leigh from Mary March, a native woman taken up the Exploits by Mr. Peyton in March, 1818"; written by Capt. Hercules Robinson, R.N., 1820.  British Library Add MS 19350

Posted by Margaret.Makepeace at 09:00:00 in Conflict , Journeys