It wasn’t always easy being Political Resident in the Persian Gulf, especially when there was a war on.  This was particularly true of Lieutenant-Colonel C G Prior, Britain’s senior administrator, based at Bushire in Persia, who was knighted in 1943 as Sir Geoffrey Prior and wrote a review of the year of his knighthood in his Administration Report of the Persian Gulf for the Year 1943. 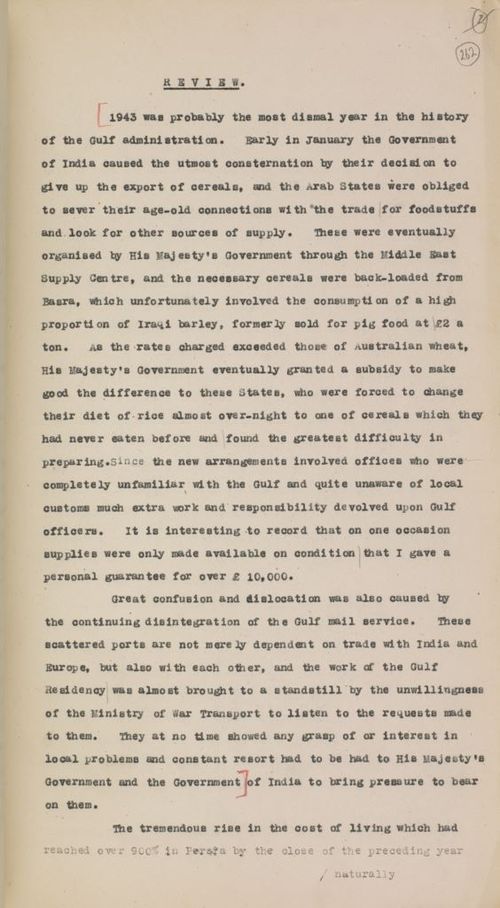 Despite the fact that the Gulf was an exceptionally quiet posting in those war-torn years (the 1941 Report says that the Gulf enjoyed ‘almost perfect peace’ throughout that year), Prior found plenty to complain about.  His review covers everything from his annoyance that the Government of India had stopped the export of cereals, which forced the local populace to give up their habitual diet of rice overnight, vastly increasing the workload of Gulf officers, to the failings of the British military authorities, who were given control over wide areas about which they knew ‘nothing whatever’ and failed to share important intelligence information with civilian colleagues, such as the report of the capture of a German agent called Mayer.

However, Prior reserved his greatest indignation for Britain’s American allies.  ‘It would’, he begins quietly, ‘be agreeable to record that our Allies were cooperative and considerate, but this was not the case.  Almost without exception the American detachment and visiting American officers whether of the Army or the civil organisations showed little desire to consult with their British colleagues or to cooperate with them’.  An instance of this, says Prior, was the decision of the Americans to electrify the perimeter of their camp at Bushire, without giving any intimation of their intentions to the British Army or civilian authorities.  This, says Prior unfeelingly, ‘recoiled upon their own heads as the first victim was an American soldier'.  He goes on, ‘Their behaviour varied from the unsatisfactory to the deplorable’.  Not even the cutlery was safe: ‘At the fête given in aid of the Persian Gulf Fighter Fund at Sabzabad, a number of articles including spoons and forks were stolen from the house, apparently by officers who penetrated the building’.  The crime was perhaps stimulated by the effects of liquor on an unprecedented scale, as ‘The drunkenness shown by the men on this occasion was without parallel in Bushire’.

There were other, even more shocking displays of bad behaviour for British officials elsewhere in Persia, and ‘the incident of the four American soldiers who penetrated the Governor’s house at Khorramshar one night and requested him to supply them with women will long be remembered’.

Prior at least provides some balance by also expressing his disapproval of ‘our Russian allies’. These, ‘though far better behaved’ than the Americans, ‘showed no desire to cooperate’ and perhaps worst of all for the clubbable British, remained ‘inscrutable and aloof’.  Prior concludes unkindly by saying that ‘The Residency as a whole heaved a sigh of relief when both these bodies took their departure’.