‘Our hero is a sportsman’: British domestic interiors in 19th century India

The British public first glimpsed the domestic interiors established by East India Company men and women in India through portraits. Although many artists situated their subjects in verandahs or out in Indian gardens, some painters chose interior settings.  These early peeks soon became unsatisfactory as greater numbers of Britons (including women) embarked for India in the early 19th century. At this point, demand grew for information about life in India.

While early books relied on text to enlarge on topics as diverse as the prevalence of white ants and the dangers posed by tigers, in the 1810s they also came to include images. In 1842, for instance, William Tayler published Sketches Illustrating the Manners & Customs of the Indians and Anglo-Indians.  His employment in the Company allowed Tayler to claim particular knowledge of Anglo-Indian life in Bengal. His images and descriptions aimed to instruct British audiences at home but also contained inherent tensions, depicting both a desire to conform to British norms and a separate Anglo-Indian way of life.  They also hinted at the ways in which men and women might perform that Anglo-Indian identity differently. 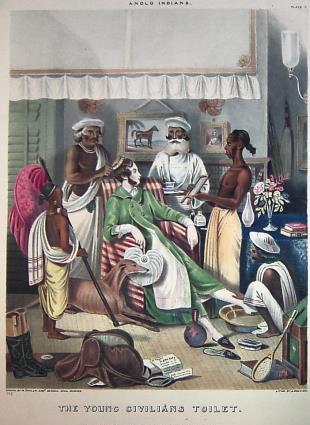 ‘The Young Civilians Toilet’, William Tayler, Sketches Illustrating the Manners & Customs of the Indians and Anglo-Indians (1842)

In response to the ‘nabob controversy’ of the late eighteenth century, East India Company officials resident in India sought to justify their seemingly luxurious lifestyle. They explained their large retinues of servants by arguing that this was the best means by which they could enact their growing governance roles.  ‘The Young Civilians Toilet’ shows a domestic space with multiple Indian servants performing different tasks and a range of distinctively ‘British’ objects. Riding boots, saddle, gun case and ‘racquette’ remind us that ‘our hero is a sportsman’. A bill for jewellery suggests at his ‘matrimonial intentions’. Despite the rich sensuality of his present life, his affections are clearly suitably bestowed on the greyhound by his side, his beloved depicted in a portrait on the wall and his ‘favourite’ horse in a separate (but more central) portrait beside her. 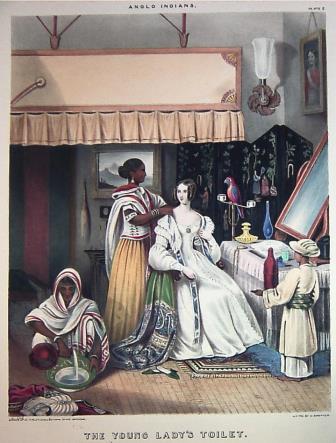 ‘The Young Lady’s Toilet’, William Tayler, Sketches Illustrating the Manners & Customs of the Indians and Anglo-Indians (1842)

Tayler’s next image is of the young woman at the centre (or near centre) of ‘our hero’s’ affections. Again much attention is given to the servants waiting upon her.  Yet the objects in the room fail to assert a predominantly British character. While a portrait of a British soldier takes pride of place above her dressing table, the foreground is claimed by a fan and shawl.  A parrot sits in front of a Chinese lacquer screen, a reminder of the intra-Asian trade. Indian landscapes are referenced in a painting rather than homely scenes of Britain. A large punkah and a ‘striped cloth Purdah’ also hang in the room.

Tayler is commenting on the material strategies young Britons could use to continue to perform their national identities whilst highlighting their confident engagement with Indian practices. Yet it seems that their different genders presuppose different relationships with India and China. The objects in each room suggest that while the young man remains wedded to Britain, the young woman is in danger of becoming thoroughly entangled with Indian Ocean world. Tayler resolves this problem in a third engraving showing the pair married and sat at the breakfast table. British accoutrements safely surround the woman. Most significantly she now has a dog by her side – no doubt a gift from ‘our hero’. 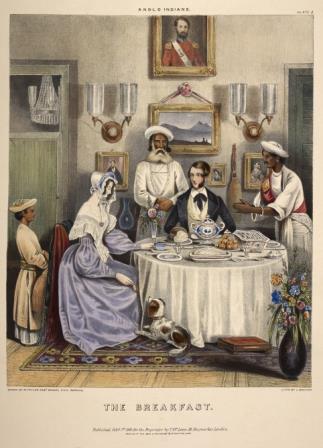 ‘The Breakfast’, William Tayler, Sketches Illustrating the Manners & Customs of the Indians and Anglo-Indians (1842) Images Online

Posted by Margaret.Makepeace at 09:00:00 in Arts and crafts , Commerce , Domestic life , Journeys , Leisure