Every year Indian Muslims undertake the journey from India to Mecca as part of the Hajj, the fifth pillar of Islam.  Prior to 1947, the British Indian Government maintained a strong interest in the welfare and safety of pilgrims travelling from India, and regularly received reports from the British Agent at Jeddah on the yearly pilgrimage, copies of which can be found in the India Office Records. 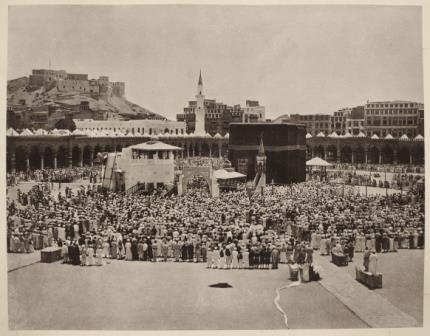 The outbreak of hostilities between the British and Ottoman Empires in 1914 raised fears about the impact this would have on the Hajj.  In November 1914, the British Government published an undertaking in the Gazette Extraordinary that the holy places of Arabia and Jeddah would be immune from attack or molestation by the British naval and military forces so long as there was no interference with pilgrims from India.  Similar assurances were given by the Governments of France and Russia.  Despite this, there remained fears for the safety of the pilgrims who would be entering a zone of conflict.  There was also a concern among British officials that foodstuffs and other supplies exported from India for the use of pilgrims in Jeddah would be appropriated by Turkish forces.  The Indian Government had briefly stopped exports of food from India to Jeddah following the seizure of a cargo of food supplies by the Turkish authorities in March 1915.  However reports of distress amongst pilgrims and residents of the holy places had caused the exports to be resumed.

In the summer of 1915, the Viceroy and the Secretary of State for India exchanged telegrams on the subject of whether to prohibit pilgrimage from India.  The Secretary of State favoured prohibition of pilgrimage for that year, explaining “It is not desirable that large numbers of such [British subjects] should visit enemy country during war.  We can neither protect them nor ensure food supplies. Turks might detain influential men as hostages and would tamper with loyalty of all more effectively than last year”.  However, the Viceroy, Lord Hardinge, felt there should no prohibition as it would offend Muslim opinion in India, give an impression of British weakness, and be inconsistent with the British Government’s published undertaking.  It was finally decided to allow pilgrimage from India, but to discourage Indian Muslims from embarking on it.  Assurances were also sought from the Ottoman Government, via the American Government, that food supplies exported from India for the pilgrims would not be diverted to other purposes.

Despite the considerable difficulties, pilgrims continued to travel from India on pilgrimage to Mecca every year throughout the War, although in smaller numbers.  By 1917, the situation had improved enough for Lieutenant Colonel Wilson at the British Agency at Jeddah to write “It may I think be said that, for a War Time Pilgrimage, that of 1917 may be reckoned a great success from every point of view”.

Europeana 1914-1918, a free online resource which brings together original wartime documents, films and stories from 20 countries across Europe.