Cityread London, which launched this week, will run throughout April with events in every London borough; aimed to promote reading for pleasure and also to encourage Londoners to contemplate their city’s history.  Each year Cityread London selects a book for the whole capital to read together and for 2014 this is My Dear I Wanted to Tell You by Louisa Young, selected to mark the centenary of the outbreak of World War One.  Louisa will be speaking about this at a Cityread London event at the British Library on 14 April.

Also as part of the Cityread London event programme, several public libraries are hosting a production by the District 6 Theatre Group, on the role and experience of soldiers of colour in World War One; exploring the contribution made by people of all colours, ethnicities, religious beliefs and nationalities to the British war effort in World War One, whether by serving in the armed forces or providing material and financial resources.  You can see this performance on these dates at the following libraries: 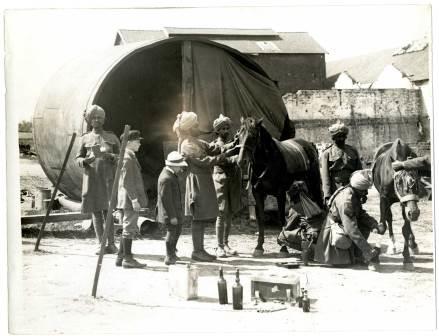 It is encouraging to hear that Cityread London 2014 events are including these narratives; as non-white non-European experiences of World War One have traditionally been given less media coverage than other aspects of the war.  For researchers interested in this topic, there is a wealth of material in the British Library’s India Office Records with information about the stories of South Asian soldiers serving in the British Indian Army  during World War One; we blogged about some of these stories previously in posts Indian soldiers’ views of England during World War I, An Indian soldier in France during World War I, and The Indian Sepoy in the trenches.  Furthermore last month we wrote about the experiences of Indian Muslims travelling from India to Mecca as part of the Hajj during World War One  in the post Pilgrim traffic during the First World War.

World War One sources on the British Library website