A common sight across the length and breadth of Britain are memorials to those who lost their lives in the First World War. In cities, towns and villages, churches and cathedrals, public squares and gardens, and in public buildings of all kinds, these memorials commemorate the sacrifice made by men and women from all walks of life during that terrible conflict. In 1919, the India Office commissioned its own memorial tablet to commemorate the members of the India Office and the India Store Depot who died for their King and country in the Great War.

Quotes for the cost of the work were sought from three companies, J W Singer & Sons Ltd, Farmer & Brindley Ltd, and Ashby & Horner Ltd, and designs were received from each. A file in the India Office Records contains the correspondence and other papers relating to the memorial, along with examples of the different designs. Proposed designs included a bronze centre panel with Sicilian marble frame (by Singer & Sons) for £250, and a white marble panel with an oak frame (by Ashby & Horner Ltd) for £425. 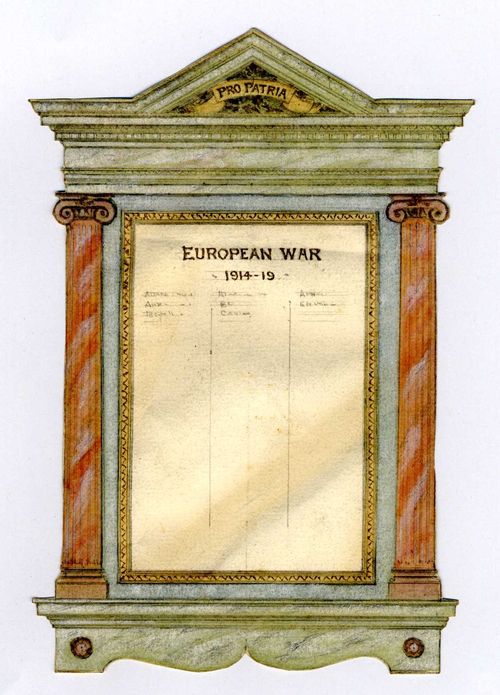 The contract was subsequently awarded to Farmer & Brindley Ltd for a design in alabaster and statuary marble at a cost of £316. The contract, dated 24 December 1919, and signed by T Herbert Winney, India Office Surveyor, stipulated that the work was to be completed within 20 weeks of that date. However, a number of points remained to be settled. It was decided on chocolate brown for the colour of the lettering in the inscription, and the date of 1914-19 was chosen (although the Military Department insisted that the Great War had not yet officially ended). These issues, along with amendments to the inscription, caused delays, and by October 1920 the India Office was urging Farmer & Brindley to finish the work in time for Armistice Day. The memorial was officially unveiled by the Marquis of Crewe on the 26 February 1921. It lists the names of 30 members of the India Office who died during the war, and is in the Foreign & Commonwealth Office building in Westminster. 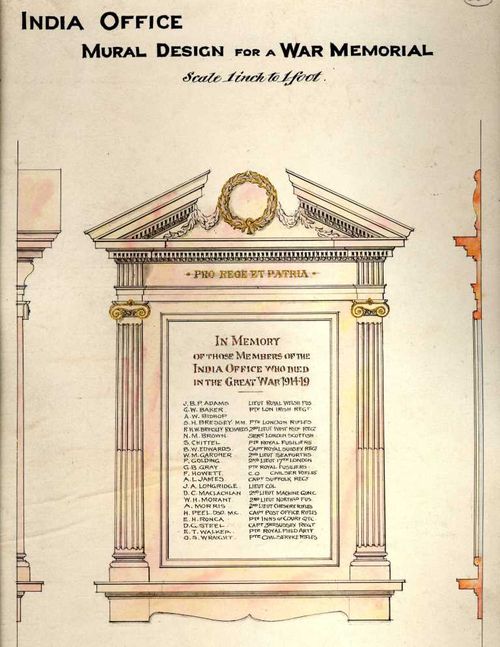 In the same file are copies of the India Office Roll of Honour, recording all those who served in the Great War in whatever capacity. Listed in alphabetical order, class distinctions were dissolved. Included equally in the list are messengers, such as C D A Simmons, Chief Petty Officer in the Royal Navy, and J Teague, Motor Machine Gun Corps, and a Member of the Council of India, Sir T Morison, K.C.I.E., 2nd Lieutenant in the Cambridgeshire Regiment. Also listed is Miss G F C Arnell, who served in the Voluntary Aid Detachment.

It is interesting to see a woman listed on this memorial. I found Miss G F C Arnell on the 1911 census as Gladys Fanny Arnell, living in Mortlake, Surrey. Her occupation is given as "ditto" under her sister's entry of "Shorthand Typist". Below "Industry or Service" is written "India Office". After the war, it appears Gladys married a Frederic Sanders (1919) and moved to Essex.