Making a little money on the side

Major William Joseph Mathews of the 9th Bengal Native Infantry had served in the East India Company’s Army for 25 years. Perhaps he thought that his official salary was not enough to maintain his lifestyle and so created a system of stealing from his subordinates and the Government of India.

On four separate occasions Major Mathews simply withheld pay from soldiers. Fifteen sepoys received only 4 pice a day for six months and he kept the rest, which gave him Rs.611. Other newly enlisted sepoys were not paid Rs.1709 between January and June 1818.  The bugle men were Rs.240 short for ten months, and the sircars of his company were not paid at all in June 1819. 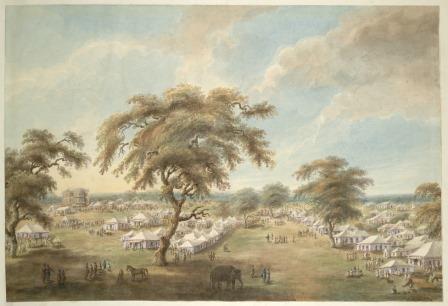 The veteran of the Second Mahratta War and former aide-de-camp to Lord Moira also came up with the most sophisticated mechanism to make false muster rolls. In 1818 he inserted fifteen fictitious names for sepoys and claimed their salaries for eighteen months (Rs.1125). He also added 61 names to the muster roll of the non-existent hill sepoys, which brought him an income of Rs.4188. In the same year he discharged six classies (tent-pitchers) but kept their names on the muster roll and gathered Rs.619.  The Government lost Rs.459 as the numbers on the muster rolls were different to the payment books. When he faced a court martial on twelve charges in 1820, it was concluded that ‘from the confused manner in which the muster-rolls are drawn up, the court cannot find the precise number of names and sums embezzled’.

Major Mathews did not scorn embezzling even small amounts. He kept a part of the Bazar Chowdree’s salary (this was an agent supplying workmen and goods for public purposes) and once the man left the post, Mathews just paid himself the salary (Rs.60). In a similar manner the Bazar Mootsuddie (native accountant) was robbed of Rs.25. He also appointed three virtual Jhunda-Wallas and claimed Rs.117.

Mathews gathered about Rs.10,000 altogether.  He was found guilty on 26 January 1820 of eleven charges and dismissed from the service. On the insistence of the Commander-in-Chief the sentence was changed and Mathews was cashiered, which meant he was debarred from future employment with the Company. Interestingly the biographical note in Hodson’s Officers of the Bengal Army does not mention any of this and states that he was pensioned on 5 February 1820 and retired from the service the following year.

Capt William Hough & George Long, The practice of courts-martial, also the legal exposition and military explanation of the Mutiny Act and Articles of War, together with the crimes and sentences of numerous courts-martial, and the remarks thereupon by His Majesty and the several Commanders-in-Chief in the East Indies and on foreign stations & c. (London, 2nd ed. 1825)