On 30 October 1937 a Vickers Vincent of 84 Squadron RAF crashed at Khor Gharim, a remote and desolate spot on the southern coast of Oman.  All three crew aboard, Wing Commander Aubrey Rickards, Pilot Officer Robert McClatchey, and Aircraftman Leslie O’Leary were killed.

Khor Gharim was described by the British Political Agent, Muscat, who reported the loss in the Administration Report of the Persian Gulf Political Residency for the year 1937, as ‘perhaps one of wildest and most lawless districts of the State where the authority of the Muscat Government is treated with scanty respect’. 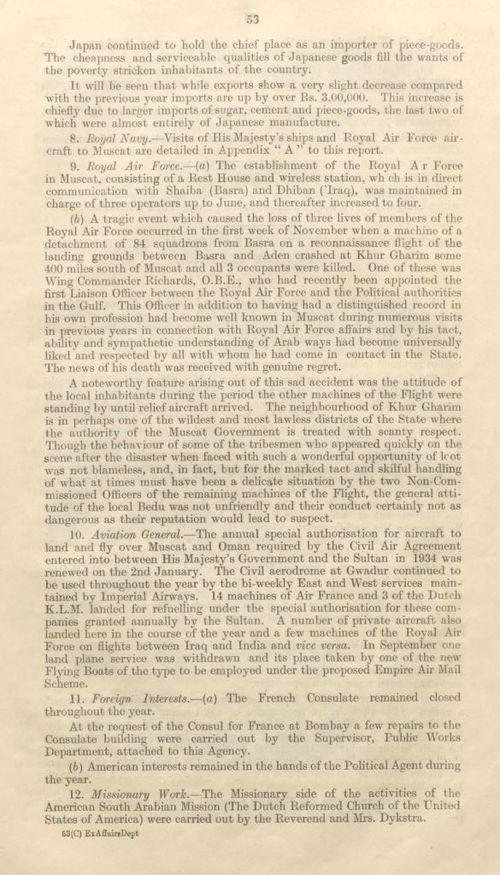 A general increase in air traffic was one aspect of the changing face of the Persian Gulf in the 1930s, stimulated by oil discoveries in the region and the need for improved communications.  Security was also becoming increasingly important to the British as the threat of war loomed, and 84 Squadron was involved in reconnaissance of landing grounds between its headquarters at Basra and the important British base at Aden.

Rickards’s death was a tragic loss.  In addition to intelligence and liaison work that helped preserve the security of Aden, he had done much to increase geographical knowledge of the little-known hinterland of the southern Arabian Peninsula, by means of air photographs and sketch maps made from his cockpit.  His efforts earned him the OBE for services to Aden.

Rickards’s plane was one of a squadron of three, and the crews of the other two reported their horror at seeing the lead plane, piloted by McClatchey, smash into the shore on the far side of a salt water lagoon while attempting to land.  The bodies of the three RAF men were buried at the site.

The location of the graves became lost in the upheaval of the war years that followed and it was not until 1997 that an expedition to mark the sixtieth anniversary of the crash went back to the area.  After making two sweeps the searchers discovered first a shard of metal from a Vincent and then human remains.  All three bodies were exhumed and transferred to Muscat. One year later they were interred in the Christian Cemetery there, while the sun set over the hills of Mina al Fahal and a lone piper played a lament.

The British Agent in Muscat remarked one other noteworthy feature of the tragedy in his 1937 report: the attitude of the local inhabitants.  Despite their fearsome reputation, and the ample opportunities for plunder afforded by the crash, the local Bedouin were ‘not unfriendly and their conduct certainly not as dangerous as their reputation would lead to suspect’.