31 March 1860, a sultry afternoon in the beautiful beach town of Zanzibar. Monsieur Frédérick Rochiez, a French grocer, was having a quiet siesta and enjoying his peaceful life in this quasi-paradise.  His tranquillity was broken by the intrusion of a group of rowdy English sailors who barged in asking for brandy.  When they were told there was none, the drunken seamen went on a rampage, vandalizing the shop and helping themselves with any booze they could lay their hands on.  After the shop was wrecked, they ran away with crates of wines as well as cash stolen from the till. 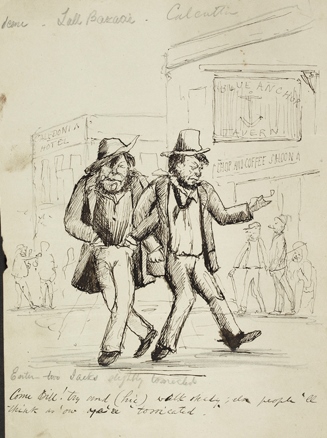 M. Rochiez incurred a substantial financial loss by this wilful looting and pillaging.   He lodged a complaint via French Consul M. Derché to Lt-Col Christopher Palmer Rigby, British Consul at Zanzibar, demanding an apology and compensation.

The British authorities felt this was French ‘extortion’, a deliberate put-up job to frame the English.  Rigby immediately launched a personal attack on the character and conduct of the French diplomats in Zanzibar.  In his letter dated 1 June 1861 to the Secretary of State for India he wrote: “I beg to state that the present French Consul (Monsieur Derché) was born and bred in the Levant…  he is now about to leave by the first opportunity, and the present Chancellier who is appointed to succeed him, is a Pole, who is stated to have deserted from the ranks of the Russian Army in the Crimea by feigning death during an action.  He lives in a most disreputable manner, and bears a very indifferent character…”.

The complaint about the drunken English sailors was not unprecedented.  The English and French had been bickering with each other for several years since both nations established their consular offices on the island.

The wine shop brawl quickly escalated to a serious accusation of slave trafficking.  The British on Zanzibar, charged with the duty of the abolition of slave trade, captured and confiscated the Famosa Estrella, a ship under Spanish colours.  The ship was consigned to a notorious slave agent named Buona Ventura Mas, who had long carried on an extensive traffic in slaves with both Cuba and La Réunion.   The British claimed that “Buona Ventura Mas was the Agent here for the two slave dealing houses of Vidal Frères, and Regis & Co” both supported by the French Consul which proclaimed to provide French protection to the ships and subjects of any Roman Catholic State, including Spanish and Portuguese.

Just next to the French territory of La Réunion sits Mauritius, a British possession in 1861. Hundreds of thousands of indentured labourers were shipped across the Indian Ocean to work in the British plantations on Mauritius under the conditions hardly any better than those of slaves under French protection.