Engineering a career in India

“Copy despatches to India on the results of the final examinations” - a somewhat dry description of a file from the Public Works Department of the India Office.  It obscures the fact that the contents offer fascinating glimpses into the world of late Victorian technical education and the talents (or lack thereof) of the young men who underwent training in Britain before taking up positions in India. They passed through various courses of instruction at the Royal Indian Engineering College at Cooper’s Hill in Surrey, which opened in 1872. 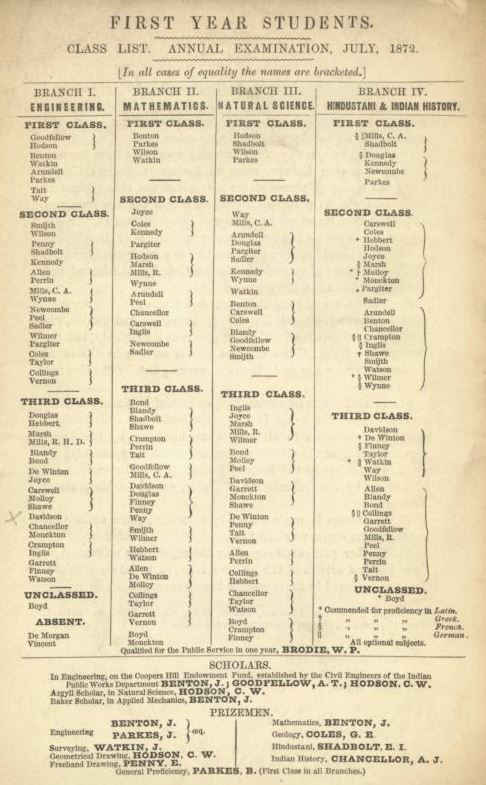 Engineering theory had to be allied to practical experience, so the students were seconded to various projects lasting ten months in workshops all over the country. During this time they were encouraged to go on other work-related visits, with some travelling to France, Belgium and Holland. They were not given free rein, however, as these entries dating from 1879  sent to, and recorded by, the College authorities show:

‘F.D. FOWLER. Where employed: under T.J. Nicholls, Esq., on the new line of railway from Manchester to Bury and Bolton … Remarks: Mr. Fowler showed in the first half of his course no disposition to acquire for himself knowledge of practical details, although he had every facility for so doing. His notes, also, were very slovenly and so disconnected as to be of little use hereafter. Since then he has done better … Mr. Nicholls speaks very well of him.’

‘P.L.A. PRICE. Where employed: at the Patent Shaft and Axletree Company’s works at Wednesbury … Leave: Mr. Price has strained the leave rules to the fullest, and on one occasion absented himself from the works, without leave, for four days. Remarks: Mr. Price is evidently not a hard working man. He is a good draughtsman, but he has failed to see the reason of being sent to works for a practical course, and has considered the course as much a task as being tied to hours at school. His special report is good, so far as it goes, but is unfinished.’

‘E.R.S. LLOYD. Where employed: … with Mr. Moorsom at the Manchester Central Station … Remarks: Mr. Lloyd wishes to do well and works, but he is reserved and seems afraid to act for himself. Consequently he is not inquisitive, and so omits making notes of details because he would have to get the information from someone else.’

Fortunately by no means all the students attracted negative comments. K.H. Stephen, who spent six months at Preston and then four at Chatham, never taking any leave, and who “ … has worked very hard and has made good use of his time. He [is] spoken of very highly … “. His Notes “are very good and profusely illustrated … The special report on manufacture of cement is good.” 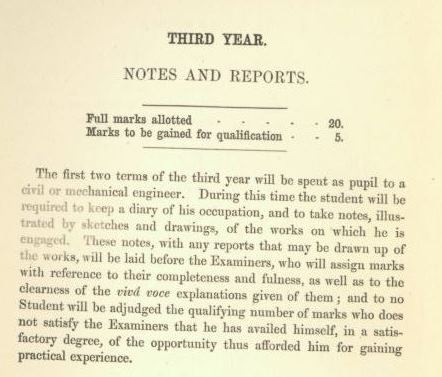 The date span of the volume is 1874 through to 1901. It records the provinces and departments to which the successful candidates were assigned, and even the names and dates of the ships which took them eastwards as they began their careers.

Three other volumes in the series include birth certificates, application papers, details of parentage and educational standard, and dates of admission and leaving, a reminder of the amazing wealth of biographical information to be found within the nooks and crannies of the India Office Records.

Petley Lloyd Augustus Price (1856-1910) played rugby for England before he went to India as an engineer. He later moved to Canada.

Edward Robert Stanford Lloyd (d.1923) retired to Hove in Sussex.  He took out a patent in 1914 on his invention of a treatment to make fabric water resistant.

Kent Hume Stephen (1856-1907) worked on irrigation in Bengal and retired to Sevenoaks in Kent.

Posted by Margaret.Makepeace at 09:00:00 in Innovation , Journeys , Science and environment , Work