Housing Shortages in Bombay in the 1860s

A subject currently much in the news at the moment is the shortage of affordable houses to buy in Britain, and the high rents being demanded, particularly in the south-east. It is interesting to note that this is an old problem, which crops up time and again in history books and archives. One file of correspondence in the India Office Records gives the example of the difficulty experienced by Government servants as a result of the high rents being demanded for accommodation at Bombay in the mid-1860s. 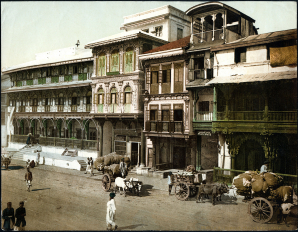 The file is concerned specifically with the difficulty which had been experienced in finding somewhere suitable for the newly appointed Chaplain of Byculla to live. Correspondence forwarded to London regarding the problem includes letters from other Government servants who were struggling to find suitable living quarters in the city. The cost of living had risen sharply in the early 1860s, with house rents in Bombay doubling or trebling. Although this caused suffering to both European and Indian residents, it was the complaints of Europeans which most sharply caught the ear of Government. Some even blamed prosperous Indian businessmen for the housing shortage, as Lt Col W F Marriot of the Bombay Military Department put it “The houses fit for English gentlemen are those most eagerly sought by the constantly increasing class of wealthy Native gentlemen, with whom the Government Officers cannot possibly compete in the amount of rent offered”.

Surgeon R Haines, a Presidency Surgeon in the 3rd District, wrote that he faced the prospect of being evicted from his current house, at which point he would literally not know where to go. He described constantly seeking everywhere for a new residence without success, and of hearing about one vacant house where a rent of 600 rupees was being demanded, which ten years previously had been rented with difficulty at 100 rupees. He had even visited several hotels in his district, and wrote despairingly of them “several are filthy in the extreme; the food most indifferent, the noise most harassing, extending often at night far into the morning hours; the company far from select, and the expense great”. Yet, even this was hard to get as “The pressure for house room is now so great that the bulk of the occupants of the hotels are more or less permanent residents”.

Assistant Surgeon C Joynt, Surgeon to the Jail and House of Correction in Bombay, wrote of his family being forced to live in a hotel in a noisy and crowded part of the city, at an expense far beyond what his pay would cover. He described renting two small rooms at a Hotel in Mazagon “…into which light is admitted through but one window, which can scarcely be kept clean, and are destitute of any approach to privacy”. Unable to afford the “luxury” of eating in their rooms, he and his wife were forced to eat their meals at the public table. Ending his letter with the threat to resign his position, he wrote “I believe I have abundant reason to complain that, after nine years’ service, and with such an amount of work, my remuneration is inadequate to defray the expenses of living – in misery”.

Correspondence with the Government of Bombay on the subject of providing an official residence for the Chaplain at Byculla, and on the difficulty experienced by Officers obliged to live at the Presidency in consequence of the great increase in the rents demanded for house accommodation at Bombay, November 1864 to May 1865 [IOR/L/PJ/3/1094 No.58]

Posted by Margaret.Makepeace at 09:00:00 in Domestic life , Work