May Louise and the Marylebone midwife

My grandmother May Louise Smith was born on 1 May 1885 in Marylebone, London.  She was very pleased with her middle name, thinking it unusual and interesting.  Louise was chosen because it was the name of the midwife who delivered her.  But would my grandmother have told us this if she had known more about the woman? 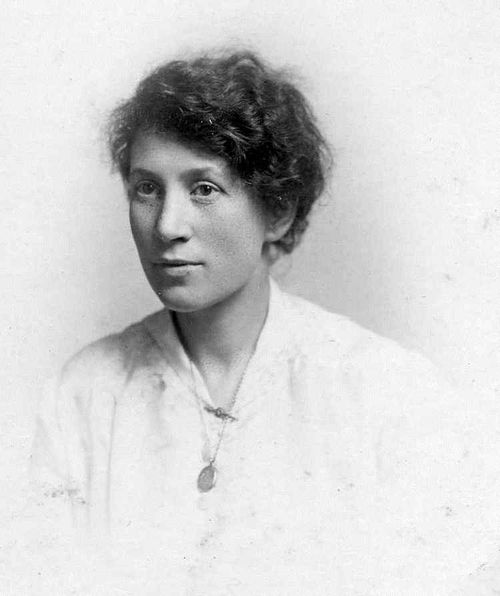 Marylebone midwife Louise Rose Mourey or Mourez was born in Paris in 1811. By 1871 she was a widow practising as a midwife in Paddington.  In 1873 Louise Mourey was charged with murder.   Anna Simon died at Twickenham on 18 February at the age of 38, a week after she had been visited by the midwife.  A neighbour told the coroner’s inquest that the dead woman had said that she would have no more children born alive.  Madame Mourey appeared before the coroner’s jury, showing specimens of her potions.  The jury decided that the midwife had administered drugs to bring about an abortion and in April she was tried for murder at the Old Bailey.  However the prosecution submitted that there was no real evidence to support the charge and Louise was found not guilty.

After this brush with the law, Louise continued to work as a midwife.  By the time of the 1881 census she was working from a house in Milton Street Marylebone.  Just one month after delivering my grandmother, Louise became involved in a scandal which was to prove her undoing.   Journalist William Thomas Stead set out to highlight the scandal of child prostitution by arranging to buy a girl of thirteen from her mother through an intermediary. Rebecca Jarrett took Eliza Armstrong from her home in Charles Street Marylebone on 3 June 1885 on the pretext of placing the child in domestic service.  Louise Mourey examined Eliza to confirm her ‘purity’ before she was delivered to a client.  Louise also provided a bottle of chloroform to incapacitate Eliza.

In October 1885 Louise Mourey faced her second trial at the Old Bailey, this time for indecently assaulting Eliza Armstrong.  She was found guilty and sentenced to six months’ imprisonment with hard labour, a harsher punishment than those imposed on the other defendants.  The judge said that he looked at her case differently: the court had been told repeatedly that Madame Mourey was a professional abortionist although there was no positive proof; he believed that she knew that the child was ‘intended for outrage’; and she was paid for her part in the abduction.

Louise Mourey was committed to the Millbank Penitentiary on 10 November 1885. At first she was required to pick a pound and a half of coir per day.  When she could not cope with this, the task was changed to knitting. On 25 November, she was admitted to the prison infirmary suffering from ailments affecting her kidneys, lungs and heart.  Friends visited her, and she was well cared for, nourished with meat, wine and various kinds of fruit.  Louise Mourey died in prison on 20 January 1886 aged 74, a wicked woman in the eyes of many. Yet we have seen that one mother she attended was grateful  enough to name her daughter after her.

British Newspaper Archive – for example, the  inquest into the death of Louise Mourey is reported in Worcester Journal 30 January 1886.