Adult and contentious themes such as sex and violence are a feature of Comics Unmasked at the British Library. If you want to understand how moral and social values have changed, if you want to see how under-represented sections of society have expressed themselves, and if you want to see what political issues have exercised people’s minds, then comics are a source not to be overlooked.

There are three broad categories of content in the exhibition that might be considered ‘difficult’. The first is material that reflects the period in which it was published. Britain has changed considerably since the 1950s, for example, and the treatment of race in Enid Blyton’s Mandy, Mops and Cubby stories makes uncomfortable reading today. But it reflects views that were current at the time and the stories, illustrated by Dorothy M. Wheeler, were published in a leading London newspaper as well as being issued as children’s books: they were therefore considered mainstream and are an example of how the library’s collections can help gain a historical perspective on society and its changing values. 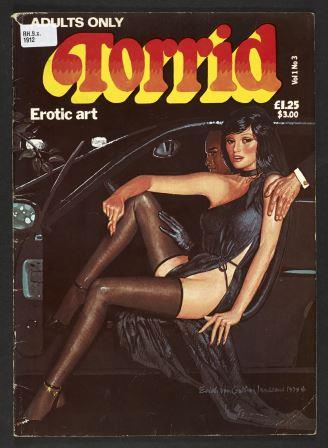 Next there are comics that aimed to shock at their time of publication. Skin (1992), written by Peter Milligan with artwork by Brendan McCarthy, uses graphic violence as part of a reaction against the gentrification of comics into respectable graphic novels. It’s part of a bigger picture. The pages from Skin that we have selected to display are upsetting, but they illustrate the power of comics and why writers and artists so often choose to work with this medium.

Finally, there is material that was originally produced for a relatively closed audience of like-minded people, but which we are displaying to the wider public. Much of the erotica falls into this category, such as the comics that appeared in a range of ‘top shelf’ magazines. While some visitors may be bemused by the explicit drawings of a rough sex fantasy in the 1970s gay title Him International, others may be offended. In the section ‘Let’s Talk About Sex’ we consider how erotic comics have developed over time: how they are a reflection of changing attitudes in society, how they altered with arrival of HIV/Aids, and so forth. The curatorial team feel that this is an important topic to address. Nevertheless, the design of the gallery space allows visitors to walk straight past this entire section should they wish.

Adult and contentious they may be, but these comics are an important historical resource. Comics creators have often pushed at the boundaries, and through them, we can all be inspired to think about these boundaries and how they have always changed with time.

Posted by Margaret.Makepeace at 09:00:00 in Arts and crafts , Comics-unmasked , Politics

After seeing this exhibition today I felt I had to post a review to make sure comic fans avoid this depressing experience. What a drab and dreary look at the wonderful exciting world comic fans have grown up with. £9.50 to see 50 or so pages of comic art trapped under plastic display units with a very brief description depicted beside. Boring is too boring a word to describe this exhibit that just seems to be cashing in on the rising popularity of the comic art form and it's origins.Avoid.