Rolling out the red carpet

In 1912 the India Office in King Charles Street Whitehall needed to replenish its stock of carpet for general use.  The patterns selected were strikingly different from the bland corporate grey of modern offices.  Carpet samples in the archives show an oak design in shades of brown and a red Persian pattern.

Tenders were invited for the supply of 400 yards each of Brussels carpet in the oak and red patterns.  Three firms submitted quotes: Fox & Co of Bishopsgate, Maple & Co of Tottenham Court Road, and Hampton & Sons of Pall Mall. The order was granted to Hampton & Sons who submitted the lowest tender of a total of £130 0s 0d. 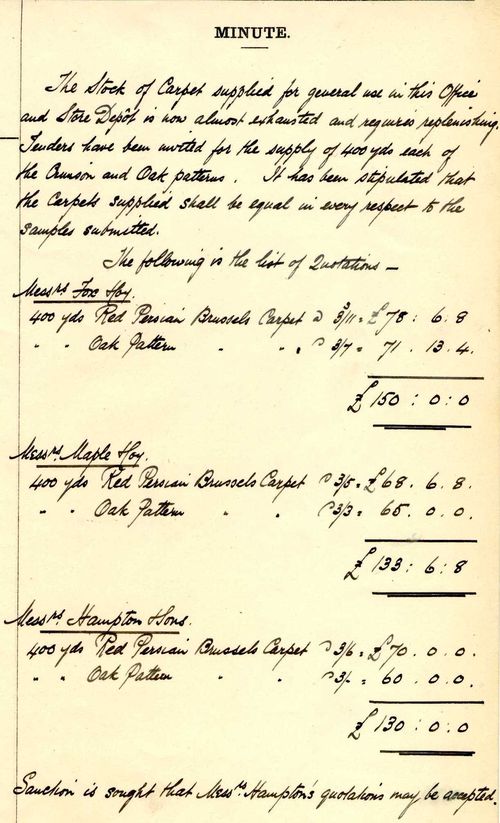 Hampton and Sons was established in 1830, becoming one of the largest furnishing stores in London by 1900.  As well as carpets, the store stocked crockery, cutlery, wallpaper, chimney pieces, blinds, curtains, parquet flooring, furniture, mirrors, coal scuttles, kitchen ware, gas brackets and  lamps. The Pall Mall shop flourished until November 1940 when the building was gutted after being hit by an incendiary bomb.

The records of the Surveyor’s Department in the India Office Records contain a wealth of detail on the equipping, maintenance, and repair of the King Charles Street building (now part of the Foreign Office), from the installation of secret telephones to the procurement of lavatory paper holders.  In future posts we'll share more documents which shed light on everyday life in the corridors of Whitehall 100 years ago.

The Victorian Catalogue of Household Furnishings, with an introduction by Stephen Calloway (1994)

Posted by Margaret.Makepeace at 09:00:00 in Arts and crafts , Commerce , Domestic life , Work