Astronomy played a fairly minor role in relation to Talbot’s other interests: he published only three papers over a span of 45 years.  Nevertheless he was highly respected by professional astronomers and contributed to ongoing research. It was also an interest that he shared with his whole family, frequently sending letters and notes to them detailing forthcoming astronomical events and phenomena. 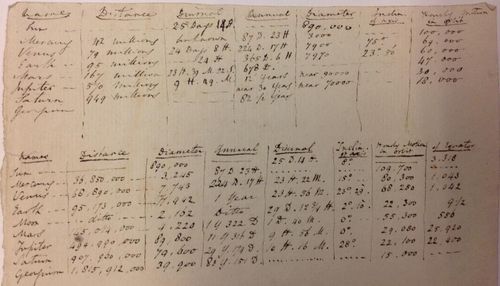 In this document Talbot has listed information on all the then-known planets. Of particular interest is his listing of the planet ‘Georgium’, short for Georgium Sidus, named by the astronomer Frederick William Herschel (1738-1822) in honour of King George III of England. We now know this planet as Uranus. MS 88942/1/363.

Talbot was fascinated by comets in particular and he devoted much time to describing and studying them, including Halley’s comet when it appeared in 1835. Below are several extracts from notes he made on comets, the first dated 1822 and the last 1858. 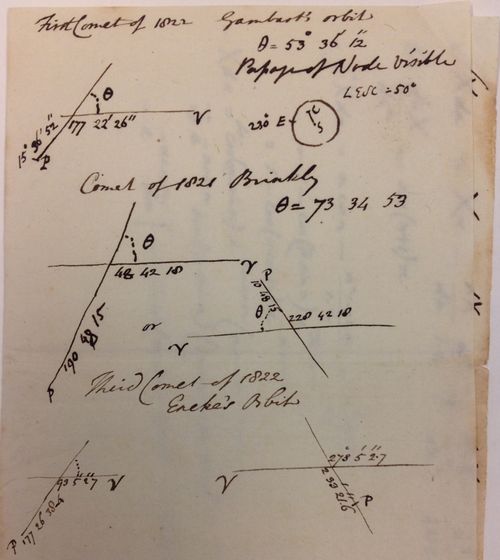 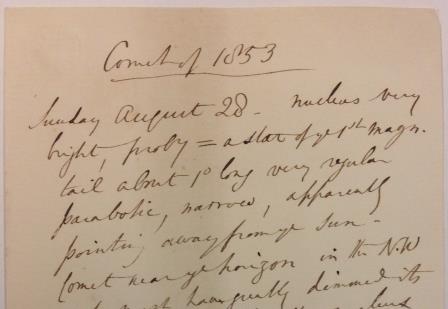 In 1851 Talbot published a report on the eclipse of the sun for the British Association for the Advancement of Science. Although he had been asked by the then Astronomer Royal Sir George Biddell Airy (1801-1892), he declined to try photographing the event.  He claimed that, even if technical difficulties in achieving this could be overcome, ‘the excitement of the observer as the critical moment approached would be such that I think if he attempted to make many observations of different kinds he would probably fail in all of them' [Fox Talbot to Airy, 2 May 1851, Cambridge University Library RGO 6/119 ff. 500-501]. 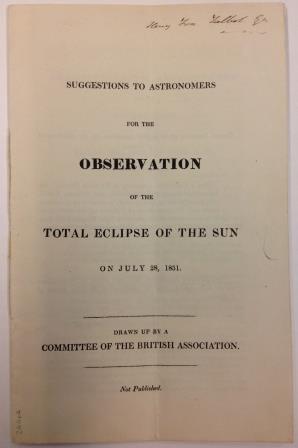 Talbot’s copy of Suggestions to Astronomers for the Total Eclipse of the Sun on July, 28, 1851 issued by the Committee of the British Association before the eclipse. It is thought Talbot may have contributed to the comments on photography in this publication. MS 88942/3/2/13.

Talbot had long been interested in spectral analysis, having an article published as early as 1826 entitled, ‘Some experiments on Coloured Flames’. He continued with these experiments publishing another paper ‘Facts relating to optical Science’ in 1834, before moving on to other interests. However, the work he had done established the concept of chemical spectrum analysis which pointed the way towards the work of Gustav Kirchoff (1824-1887) and Robert Bunsen (1811-1899) and the proving of spectrum analysis as a useful tool in chemistry and astronomy in 1859. 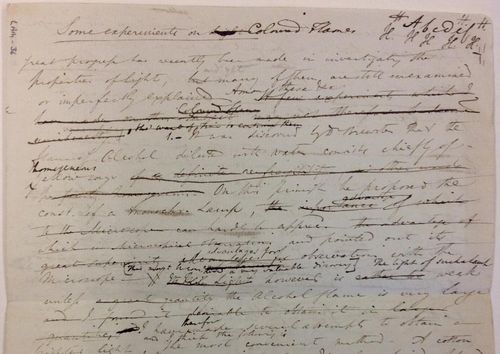 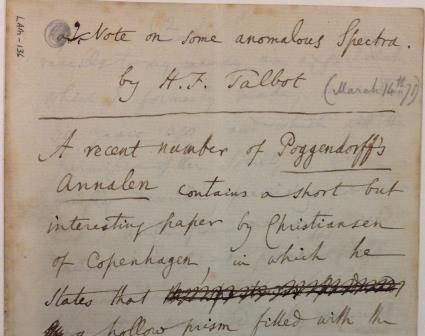 In 1871, in a paper entitled ‘On estimating the distances of some of the fixed stars’ delivered to a British Association meeting in Edinburgh, Talbot proposed using spectral analysis to calculate the distance of stars from Earth. This was a relatively new field of study and although Talbot’s idea was ingenious it was not altogether practicable. However within a decade of his death, in 1877, spectral analysis was used in locating some binary star systems.

Posted by Margaret.Makepeace at 09:00:00 in Science and environment