On 28 June 1914, Archduke Franz Ferdinand of Austria and his wife Sophie Duchess of Hohenberg were assassinated in Sarajevo.  King George V commanded that the British court should wear mourning for a week.  Many members of the court would have been particularly shocked by the news as the dead couple had visited England in November 1913. 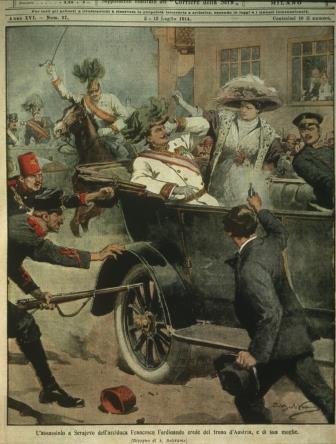 Franz Ferdinand had visited Britain before but this was the first time he had been accompanied by his wife. To judge from the reports in the British press, Franz Ferdinand and Sophie spent their time in England shooting, shopping, and meeting dignitaries such as Prime Minster Herbert Asquith. A royal shooting party was organised at Windsor Park led by the King and the Prince of Wales. It is not clear if the Duchess took part, but she was said to be a splendid shot and a regular participant in hunts in Austria.  The weather was varied – ‘delightful’ on 19 November, raining all day on 21 November.

On 22 November the Archduke and Duchess left King’s Cross by special train to pay a visit to the Duke and Duchess of Portland at Welbeck Abbey in Nottinghamshire.  On arrival at Worksop, the platform  was covered with crimson carpet and the station decorated with shrubs and flowering plants. Crowds had gathered to greet the royal couple.

The Duke organised another shoot for his guests.When they left for London on 28 November, they were driven in an open carriage drawn by four horses with postilions.  As they passed through Worksop, they were cheered along streets decorated with flags.

Franz Ferdinand and his wife indulged in a little retail therapy in London’s West End.  The Archduke visited one shop just as it was closing and ‘not knowing who he was the assistant showed the usual unceremonious activity that is displayed when they wish to get rid of a customer who has come in at an awkward time’.  However the Archduke was not going to be bustled and took his time over his purchases.  When the assistants began sweeping the floors, raising clouds of dust, and banging chairs about, Franz Ferdinand told his aide that it was time to go ‘before they do worse things to us’  (Yorkshire Evening Post 2 December 1913).

On 29 November Franz Ferdinand and Sophie visited the theatre in London. The next day they attended Mass at the Jesuit Church in Farm Street and then took a train to Dover en route to Calais and Vienna.

Many Austrian honours were conferred in connection with the visit, for example the Duke of Portland was awarded the Grand Cross of the Stephan Order, and John Fortescue the librarian at  Windsor Castle was made Knight Commander of the Order of Franz Joseph. Gifts were sent to the King and Queen – mounted hunting trophies, and Tuscan lace and embroidery. The staff at the Ritz had fond memories of the visit, holding the Archduke in high esteem because of his generosity when tipping.

Posted by Margaret.Makepeace at 09:00:00 in Journeys , Leisure , Politics , World War One