Grit and humour? How did people cope in the First World War?

In our exhibition Enduring war: grief, grit and humour which opens in the Folio Society Gallery at the British Library in London today, we consider how people coped during the First World War both at home and at the Front.  Looking at themes such as family, friends, faith and humour we commemorate the contribution so many made to the war effort and the ways they were subsequently honoured,  giving a voice to some of the men, women and children who lived through the war. 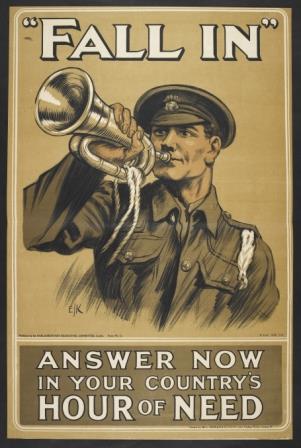 The exhibition brings together material that has come to have national significance, such as the manuscripts of now famous war poets, with more ephemeral items, like Christmas cards and knitting patterns, that you might not expect to find in the Library’s collection. We’re displaying posters, trench journals, letters from Indian soldiers at the Western Front and a schoolboy’s essay about a Zeppelin raid over London together with manuscripts of works by Wilfred Owen, Vaughan Williams and Laurence Binyon. To give you a flavour - if you’re interested in Rupert Brooke, we have both a manuscript of his poem ‘The Soldier’ and a card sent to him about socks.

Enduring war is part of the Library’s wider involvement in the First World War Centenary. The Library has been leading the UK’s contribution to Europeana1914-1918.eu, a major, online digitised resource, and the exhibition includes a specially-commissioned and deeply- moving audio-visual installation and soundscape, which focuses on postcards sent home from soldiers drawn from the extensive collections contributed by members of the public to Europeana 1914-1918.

As you can see, the exhibition is a mix of the public and the personal – and one of the most poignant items is a letter dated 20 July 1916 from Roland Gerard Garvin, known as Ged, writing to his family, expressing his love and bidding farewell, knowing that his letter would only be sent if he did not return from battle.  He was killed on the Somme a few days later aged only 20. There is more about him in our World War One website which includes over 500 items from across Europe selected from Europeana1914-1918 as well as articles by leading experts and teachers’ notes. His is just one of the individual and shared stories you can find in Enduring war which has been curated by Alison Bailey and Matthew Shaw, project coordinator for Europeana 1914-1918.

See what our colleagues in Collection Care have to say about some of the items they worked on for the exhibition.