In the summer of 1810 a group of European indigo planters was brought to trial in Calcutta.  John Lathbury Turner, James Tichborne, Thomas Gardiner, Thomas Clarke, and Robert Scott Douglas were accused of murder and serious assaults by their native contractors, employees, and servants.  East India Company officials recorded the gruesome accounts of witnesses detailing atrocities committed in the interior of the country.

John Lathbury Turner was indicted for the murder of Mootty Roy who was expected to supply indigo to Turner’s factory at Suvoonny.  Turner sent for him and other ryots to ask why they had not sown indigo. To teach Mootty Roy a lesson, Turner punched him in the face and kicked him repeatedly. Mootty Roy and his companions were then put in the stocks for the night.  Mootty started complaining of horrible pains in his belly and was eventually released from the stocks and laid on the ground.  A mysterious ‘Mussulman’ appeared, claiming that Mootty Roy had been bitten by a snake, praying and casting spells to cure him.  Poor Mootty Roy died in agony. Witnesses swore they had not seen any snakes, that Mootty Roy did not complain of any bites, and there were no signs of any on his body. However the jury believed the evidence about the bite and Turner was acquitted of murder. 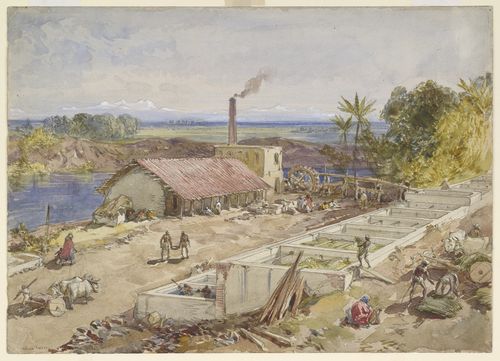 James Tichborne was accused of murdering a gomasta (native agent) employed in the timber trade. He summoned the gomasta to adjust his accounts although the man was very ill, confining him for fourteen days in an out-house used as a bath house and privy.  In all that time the man only ate a little sherbet, saying he could not eat food in a privy and asking to be moved to a Hindu house.  When he died, Tichborne was found guilty of manslaughter and sentenced to twelve months in prison and a fine of 400 rupees.

At the next sessions, Tichborne was charged with assault and false imprisonment by gomasta Ram Gholam. There was a dispute over a sum of 5,000 rupees for wage advances to woodcutters, and Tichborne confined Ram Gholam to a boat for three months and subjected him to violent beatings.  Tichborne was found guilty and sentenced to twelve months in prison and a fine of 100 rupees.

Thomas Gardiner beat an employee with a ratten and then had salt applied to the wounds. The man fell ill with a vomiting and bowel complaint the next day and died shortly afterwards. Gardiner was charged with murder but the grand jury threw out the case.

Thomas Clarke was charged with murdering a ryot by punching and kicking him after a dispute over some bullocks. Clarke was found guilty of manslaughter and sentenced to twelve months in prison and a fine of 400 rupees.

Robert Scott Douglas was tried as an accessory to arson when a rival indigo works was burned down.  He was found guilty of harbouring the men responsible and sentenced to twelve months in prison and a fine of 1000 rupees..

The Bengal Government reacted by alerting magistrates to the ‘ illicit and improper means’ being used by European planters to compel ryots to cultivate indigo.  Offenders might lose their licence to reside in the interior.