Continuing our examination of the many and diverse interests of William Henry Fox Talbot (1800-1877), we look at his 20 year involvement in the field of Assyriology, the study of the history, archaeology and culture of Mesopotamia (present-day Iraq).

In the mid-1840s the archaeological excavation of the ancient cities of Nimrud and Ninevah had unearthed tablets and inscriptions from the Kingdom of Assyria (750-612 BC).  Among other scholars, Sir Henry Creswicke Rawlinson (1810-1895) and Edward Hincks (1792-1866) were instrumental in the decipherment of Assyrian cuneiform script. As Talbot had already published books on etymology and philology and could read almost a dozen languages, including Hebrew, his interest in this new field might have been expected. He published his own translations of inscriptions and exchanged ideas and information with other Assyriologists such as Hincks, Julius Oppert (1825-1905), Edwin Norris (1795-1872) and George Smith (1840-1876). 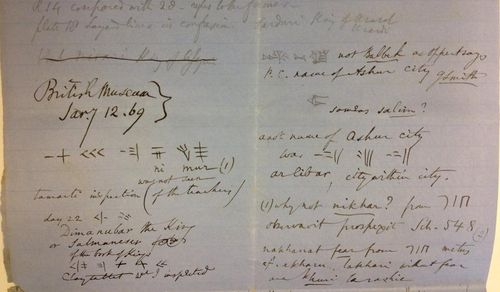 Talbot’s published translation ‘on an Ancient Eclipse’ (1872). As was his usual practice there are detailed notes accompanying the text.  MS 88942/3/1/13

Because of the difficulty in deciphering Assyrian cuneiform there was a lot of scholarly scepticism regarding the accuracy of translations. To counter this Talbot came up with a plan. He translated a recently discovered text relating to the Assyrian king Tiglath-Pileser I (c. 1115-1077 BC) and then sent it, sealed, to the Royal Asiatic Society. At his suggestion they invited three other translators, Rawlinson, Hincks and Oppert, to submit their own versions. The four separate translations were then examined by a panel of independent experts who found the texts so similar they concluded that Rawlinson and Hincks’s decipherment was valid and allowed for accurate translations. 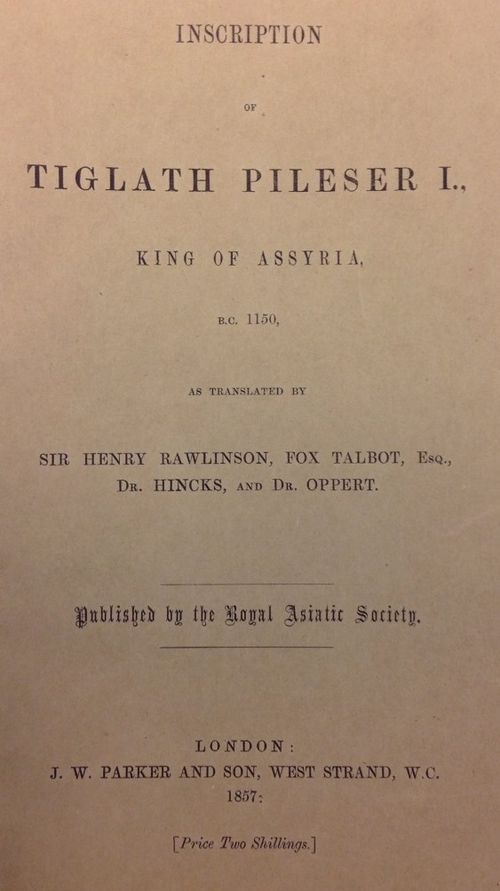 Up until his death in 1877, Talbot worked assiduously revising his translations, eventually publishing over 70 separate papers of his own. He also gave assistance to others. In 1870 when the publication of George Smith’s book on the Assyrian king Assurbanipal (668-627 BC) ran into financial difficulties, Talbot supported the project with £150 of his own money as well as checking and correcting the proofs for the author. 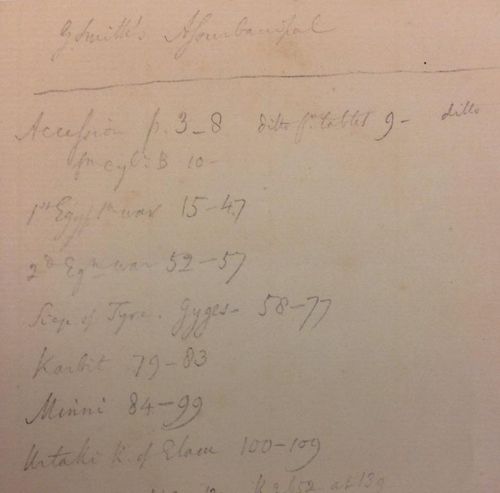 To further promote interest in Assyriology, Talbot co-founded the Society of Biblical Archaeology in 1871 and published a three volume work 'Contributions towards a Glossary of the Assyrian Language’ between 1868 and 1873. So although Talbot saw his work as primarily collaborative he was still acknowledged as one of the four key individuals in early Assyriological studies nearly 20 years after his death. 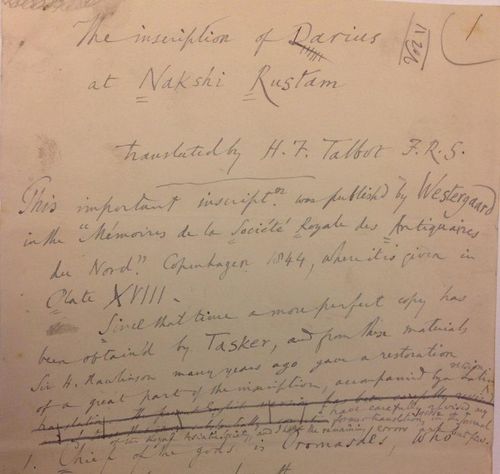 Detail of the first page of the manuscript for ‘The inscription of Darius at Nakshi Rustam’. Of interest is Talbot’s recording of the history of the inscription, crediting three individuals, among them, Niels Ludvig Westergaard (1815-1878) and Rawlinson, with the transcription, publishing, decipherment and translation of the inscription prior to Talbot’s own version. MS 88942/3/1/24

Posted by Margaret.Makepeace at 09:00:00 in Arts and crafts , Science and environment

Readers interested in the wonderfully rich Talbot archive at the BL, especially those interested in doing research on the collection themselves, may also find our recent volume a useful resource:

The essays in this book are based on recent research into this collection, and they provide historical context for understanding the scope of Talbot's interests and the Victorian networks of science and scholarship in which he participated, and in which his work on photography emerged. There is a chapter on Talbot as an Assyriologist, including the Tiglath-Pileser decipherment event mentioned above, alongside chapters about his work on botany, mathematics, photogravure, and many other topics.

Arts and crafts , Science and environment