The England football team took part in the 1950 World Cup finals hosted by Brazil. The coverage of the tournament in the British local press is fascinating. Some articles highlight how much football has changed in the past 64 years.  Others seem very familiar both in tone and content, especially those which focus on England’s less than dazzling performance. 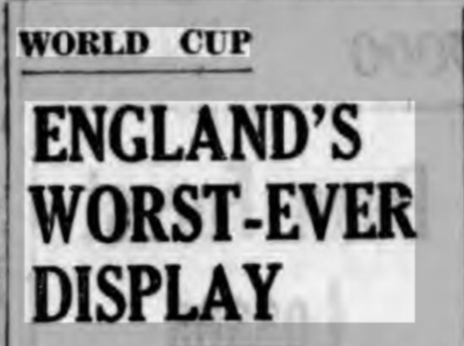 In the months leading up to the 1950 World Cup, the British press discussed which players should be selected and the team’s prospects of success.  The Yorkshire Post and Leeds Intelligencer wrote about England’s new right wing partnership of Peter Harris and Johnny Morris who played in the friendly international against Ireland on 21 September 1949. Harris had been born near to Portsmouth’s ground and had signed up for his home club for the princely sum of £10.  Neither Harris nor Morris was chosen for Brazil, Stanley Matthews and Tom Finney being preferred.

England beat the World Cup holders Italy 2-0 in a friendly on 30 November 1949. However the Derby Daily Telegraph reported that pessimistic ‘dismal jimmies’ were already writing off the team’s chances of success in Rio de Janeiro, saying that the team just wasn’t good enough. The newspaper believed that much would depend on the refereeing in Brazil.

Seventeen players flew out to Rio in one plane on 19 June 1950, having been insured for £250,000.  Each man received a daily allowance of £1 10s whilst in Brazil.  The team was warned not to comment on matches in press reports after the games.  Manager Walter Winterbottom said that his men were in great spirits and had never felt fitter in their lives. Some newspapers now rated England amongst the favourites to win the tournament.

On 26 June England won their first match against Chile 2-0.  The squad then trained for their second match against the United States on 29 June at a British mining camp 1,000 feet in the hills above Belo Horizonte.  United States won 1-0, an ‘unbelievable’ and ‘sensational’ result described by the Gloucester Citizen as ‘England’s worst-ever display’.  The Sunday Post reported that the US team had autographed the match ball and sent it home to be placed in a museum.

With a vital match against Spain looming on 2 July, Winterbottom asked for a set of canvas boots to be flown out to Brazil for his men. The boots had special rubber studded soles and toe caps. Alas! England suffered another 1-0 defeat and were eliminated from the World Cup. According to the Western Morning News, ‘English officials all thought England should have been awarded at least three penalties’.

The squad arrived back in England on 9 July, ‘hot, tired and dispirited’.  The Aberdeen Journal reported: ‘There was no official welcoming party, no red carpet or “hard luck” banners… perhaps it was just as well. The majority of the party were simply glad to be back in a country far removed from the mass hysteria of a Brazilian beanfeast’.  Winterbottom claimed England would beat United States 12-0 in a re-match, but added ‘second chances don’t come begging in the World Cup’.

Posted by Margaret.Makepeace at 09:00:00 in Journeys , Leisure