As the formal centenary of the start of the First World War grows nearer, a casual dip into the voluminous files of the India Office’s Political & Secret Department reveals details of a small, sad episode which took place in the autumn of 1915 in exotic Zanzibar. 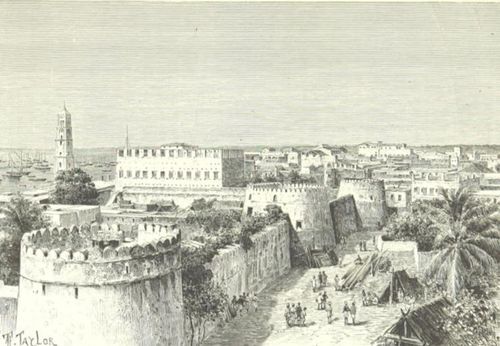 This island off the east coast of Africa had become a British Protectorate in the late 19th century, opposite the mainland colony of German East Africa. When the two countries went to war this meant that an essentially European conflict came to be fought on African soil as well.

The British authorities in Zanzibar gradually came to suspect that Jaffer Thavur, an Ismaili normally resident in Bagamoya in the nearby German territory, was involved in spying for the enemy. He had come to Zanzibar in July 1914 to see his spiritual leader the Aga Khan who was then visiting the island, and on the outbreak of hostilities in the following month he had found himself unable to return home. A thorough search of his lodgings brought to light three concealed unsigned documents written in Swahili (the local lingua franca) and Arabic, both languages which he could not understand. He was put on trial on 23 September 1915 before a military tribunal, found guilty, and sentenced to death. His public execution was set for the morning of 4 October.

On the evening of 3 October, hours before the sentence was due to be carried out, his defence lawyer Mr. Boyce  – the only individual to emerge with much credit from the whole sorry tale – sent a number of communications to the India Office, the Colonial Office, the War Office and to the Aga Khan himself (c/o the Ritz Hotel in Paris) about his client’s case. The file contains a letter to the War Office  which states

" … the Aga Khan occupies a very important position among Indian Muhammadans [sic] & has done valuable service since the outbreak of war with Turkey in bringing influence to bear on his     co-religionists to remain loyal to the British Govt".

Major General Tighe, the British military governor of Zanzibar, made his feelings plain on 5 October:

"… I very strongly desire to represent that the interference of civil authorities in proceedings under martial law creates a most undesirable precedent, especially in view of  the doubtful attitude of a certain section of the native population … "

The impasse was broken when the news came back that Jaffer Thavur was a follower of whom the Aga Khan had no personal knowledge, and this was enough for the authorities to abandon any lingering qualms and to proceed with the carrying out of the capital sentence. He was accordingly shot by firing squad at 08.00 in public on 20 October. 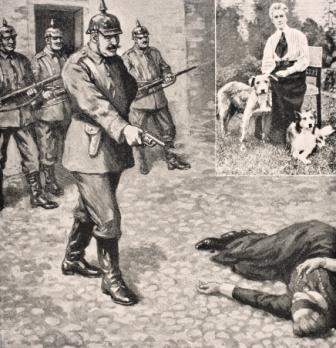 Imaginary drawing of the execution of Edith Louisa Cavell (1865 -1915) on 12 October 1915. Inset, Edith Cavell at home with her dogs Images Online © UIG/The British Library Board

A factor which may have tipped the balance against him – albeit nowhere mentioned explicitly in the file – was the execution in faraway Brussels on 12 October of the British nurse Edith Cavell, condemned for her role in assisting the escape of Allied soldiers from occupied Belgium. It is at least possible that this shocking and widely-reported case had repercussions very soon afterwards in east Africa.

Posted by Margaret.Makepeace at 09:00:00 in Journeys , Religion , World War One