George Bernard Shaw, playwright and polemicist, was born in Dublin on 26 July 1856. So we decided to post a story about Shaw to mark this anniversary . But a little research revealed that Shaw would not have been flattered or pleased – he never celebrated his birthday. 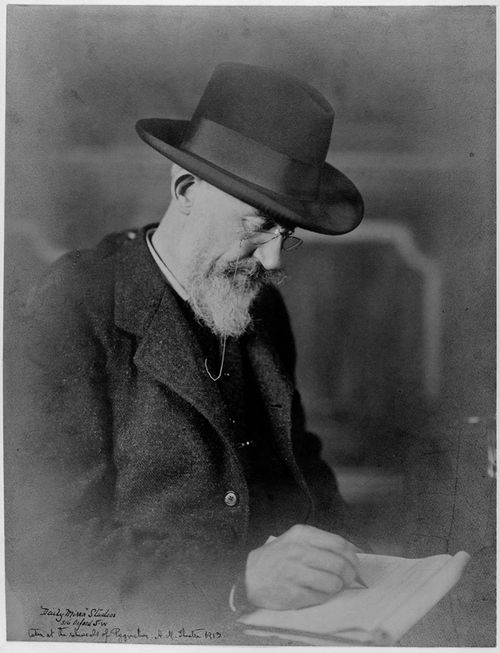 Shaw’s antipathy to birthday celebrations is revealed in newspaper articles by journalists who were eager to congratulate him.  They describe the various ways that they were rebuffed by Shaw.  A representative of the Daily News asked him on his 60th birthday how young he felt. Shaw replied that ‘The day is not really different from any other, except that when you saw me last I was between 50 and 60 and now I am between 60 and 70, not young enough to be really proud of my age and not old enough to have become really popular in England’ (Aberdeen Evening Express 27 July 1916).

In July 1929 Shaw was asked if he would give the world a message to mark the ‘notable occasion’ of his 73rd birthday. Shaw replied, ‘Please send out a brief message suppressing the fact that it is my birthday’.  During that month he was busy directing rehearsals for his new play The Apple Cart which was to be performed at the Malvern Festival.  His secretary confirmed that Shaw would be working as usual, adding ‘He does not believe in birthday parties’ (Gloucester Citizen 25 July 1929). 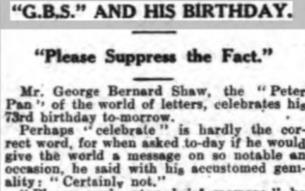 The Evening Telegraph was nevertheless not deterred from running an article pointing out that, at the age of 73, Shaw was still as active as ever: dodging buses like a man of 25, and never taking a drive in a car without breaking the law.

On his 74th birthday, Shaw declared to a reporter: ‘The more my birthday is forgotten, the better I am pleased. By deed poll I have discarded my birthday forever’ (Evening Telegraph 25 July 1930).  When a brave young reporter from the Sunderland Echo telephoned Shaw to ask him about his birthday in 1935, Shaw said:’Young man, you know not what you do.  If ever you are 79 you won’t want to discuss the fact.  And who is the least interested in my birthday?’  On being told that everyone was interested in George Bernard Shaw, the writer retorted: ‘But not in my having birthdays.  I am not distinguished by having birthdays. Public interest in me depends on the things I can do that nobody else can do. Anybody can have a birthday’.  He then declined to discuss the matter further (Sunderland Daily Echo and Shipping Gazette 26 July 1935).

Newspapers continued to commemorate Shaw’s birthdays up to the year of his death in spite of his pleas. His 94th birthday in July 1950 was marked with an article in the Aberdeen Journal stating that G.B.S. was as mentally alert as ever, although physically a little frail.  The playwright spent his final birthday at home in Ayot St Lawrence Hertfordshire: ‘He did not celebrate it – he never does’.

Posted by Margaret.Makepeace at 09:00:00 in Arts and crafts , Domestic life , Work