The Difference caus'd by mighty Love! - romance and the Benthams

In the short time since we announced on Untold Lives that the British Library had joined the Transcribe Bentham initiative and asked for volunteers to help us advance scholarly research into the life and ideas of Jeremy Bentham (1748-1832), public interest in the online transcription of Bentham’s manuscripts has exploded. In just over three months, 1,163 manuscripts have been transcribed—almost 10% of the British Library’s Bentham collection! We are delighted to announce the release of more material to explore, and cordially invite any interested newcomers to join us in transcribing them. 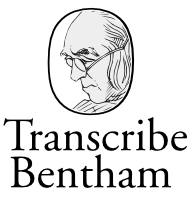 Our inclination was that the British Library’s Bentham material represents a chance to really get to know the Bentham family, since the majority of it is correspondence, and discoveries made by our volunteers have certainly borne this out.

Jeremiah Bentham, father of Jeremy, though cold-hearted in business matters (one letter reveals him being responsible for the cutting off of the water supply to one of his tenants) was found to be quite the romantic, as this love letter to Jeremy’s mother Alicia (transcribed by volunteer Peter Hollis) shows:
while I was present with you Time bore me on his rapid Wing, so swiftly did the delightful hours pass on, but no sooner was I gone from you than that Wing became pinion'd & coud no longer fly, or was rather chang'd into leaden Feet, so slowly do the Sluggish Minutes now creep forward — such is the Difference caus'd by mighty Love! Romantic interest was a dominant theme in first batch of manuscripts released online, which covered the period 1744 to 1783. Jeremy himself was courting, as shown by this rather cruel letter to brother Samuel about a certain ‘Miss S[arah]’  (transcribed by volunteer Simon Croft):
She has indeed a most enchanting set of teeth — seems well made: and is of a very good size. But her features viz: nose and mouth are too large for her face: eyes I do not recollect much about.
Indeed I could not get a full view of her face: she was dressed very unbecomingly. 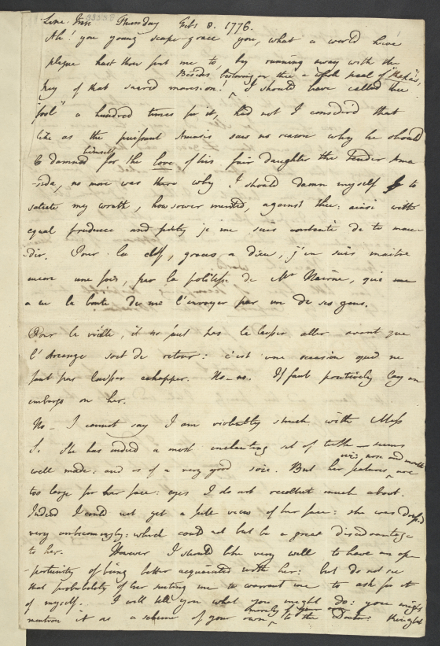 Six months later, Jeremy complained to Samuel (also transcribed by Simon Croft) that his letters to Sarah (‘the little vixen’) had gone unanswered, though we might not be surprised given his ungentlemanly attitude.

New material, covering the period 1784 until 1794, has now been uploaded to the Transcription Desk. Events covered include Jeremy’s long journey to Russia to visit Samuel, where he first conceived of his famous panopticon prison. The period also includes the early years of the French Revolution, as well as the return of Samuel from Russia in 1791, and the death of Jeremiah in 1792. Some of the most intriguing material revolves around the scheme to establish the panopticon, which dominated the next decade of Jeremy’s life, and includes his attempts to lobby leading politicians of the day.

There is no need for specialist equipment or expert knowledge to begin participating—just a willingness to get to grips with 18th and 19th century handwriting, and transcribe it through our website. Visit Transcribe Bentham today to get started!