In 1903, the Viceroy of India issued a General Order establishing the annual appointment of Indian Orderly Officers to act as the King’s honorary bodyguard in the UK. Each year four officers from the Indian Army were selected by the Commander in Chief to attend the King at Court, and at any reviews or ceremonies that the King attended during the London season. When in London, the Indian Orderly Officers (IOOs) were looked after by a British Officer, who would take them to be fitted for their ceremonial uniforms, show them around London, accompany them on their official engagements and generally see that they had everything they needed during their stay. 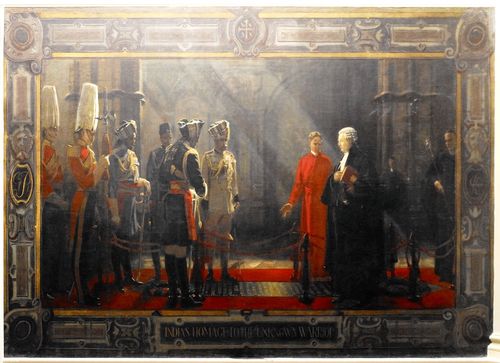 In 1926, the four IOOs were Risaldar-Major Nur Khan of the Corps of Guides Cavalry, Risaldar-Major Faujdar Khan of Skinner's Horse, Subedar-Major Ahmed Din of the 1/4 Bombay Grenadiers, and Subedar-Major Tikka Khan of the 3/2 Punjab Regiment. They were met at Tilbury Docks on the morning of 22 April by the British Officer who would look after them for the summer, Major F M Matthews, 14th Punjab Regiment. The IOOs’ first days in London were spent being fitted for uniforms and boots, shopping in Oxford Street (Selfridges amazed and interested them), and sightseeing (Hyde Park, Natural History Museum, Kew Gardens). In May, Major Matthews’ plans were upset by the General Strike. With transport disrupted, little could be done other than rather stroll around central London. Matthews wrote in the official diary: “Not knowing London they didn’t realise the changes in traffic etc which an Englishman would do. The activity with tanks, armoured cars etc in Wellington Barracks interested them”.

On 30 April, the IOOs visited Woking Mosque. Major Matthews wrote that they had been hospitably entertained and were very pleased with the whole visit. Matthews noted that: “They enjoyed the railway journey. Foggy in London but clear outside, & the green fields, cattle & sheep gladdened their hearts…Ahmed Din took snuff & slept peacefully throughout the journey. The others were interested in everything, Faujdar being impressed with the beauty of it all”.

Once suitably equipped with uniform, the IOOs had a long summer of engagements ahead of them. They were officially presented to the King on 19 May, and over the next two months regularly attended Court at Buckingham Palace, levees at St James’s Palace, the unveiling of the Kitchener Memorial at Horse Guards Parade, the opening of the Military Tournament, an investiture at Buckingham Palace, and the Buckingham Palace Garden Party. They were also taken to various social events, such as the Chelsea Flower Show, Ascot Gold Cup, Aldershot Tattoo, Gala Day at the International Horse Show, the Indian Empire Garden Party, the Olympic Horse Show, and the Royal Agricultural Show.

After what must have been an exhausting but exciting summer, Major Matthews saw the Indian Officers off at Tilbury Docks on 30 July 1926.

My father was one of the four officers who served as IOO in 1939. I have been looking for any information regading his stay in London during that time.
If anyone has any such information or point me in the right direction, I would really appreciat it.
Thank you
Faiz