Arsenic, Cyanide and Strychnine - the Golden Age of Victorian Poisoners

In July 1857 a sensational murder trial swiftly became the most talked about case in the country. The accused was Madeleine Smith, a young middle-class woman charged with murdering her lover with arsenic.

Pierre Emile L'Angelier had attempted to blackmail Smith with their old love-letters once she tried to end their relationship. The Illustrated London News described in detail “the violent illness and sudden death of L’Angelier”, and “the prisoner’s declaration in which she admitted having purchased arsenic but stated that she used it in washing, as a cosmetic…for the alleged purpose of killing rats”.  The post-mortem found approximately 88 grains of arsenic in the stomach of the victim, a hitherto unheard of amount, whilst L’Angelier’s diary alluded to feeling ill after being served coffee by Smith. Smith was found not guilty, but the case still gained a lasting notoriety, fed by the Victorian fascination for a new ‘Golden Age’ of poisoning. 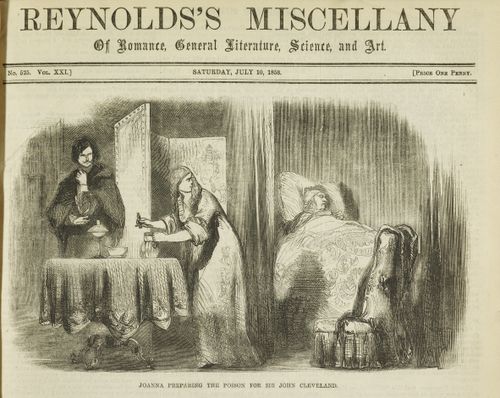 One of the main reasons why poisoning became such a common means of murder in the Victorian era was, quite simply, ease of access. Cyanide was everywhere, in everything from paints to daguerreotypes to wallpapers. As a poison, its effects were unmistakable, including unconsciousness, convulsions, nausea, cardiac arrest and death, often in a matter of seconds. Its speed, from a poisoner’s point of view, was a plus, but its distinctive effects were easily recognisable and hard to pass off as anything but murder.

Strychnine, meanwhile, was broadly used as a form of pest control in big cities. In humans, it caused frothing at the mouth and muscle spasms which increased in intensity until the victim died from asphyxiation due to paralysis of the neural pathways. Although a fairly unsubtle way to kill someone, strychnine was a popular poison for some years, favoured by murderers such as Thomas Neil Cream and Belle Gunness. In a particularly sinister instance, The Penny Illustrated reported a case in 1871 in which poisoned food parcels were sent to families in Brighton bearing the message: “A few home-made cakes for the children; those done up are flavoured on purpose for yourself to enjoy. You will guess who this is from; I can’t mystify you, I fear”.  As the paper noted, a large quantity of strychnine had recently been obtained from a local chemist by way of a forged order.

Despite the popularity of Cyanide and Strychnine, Arsenic was nonetheless the chief poison of the Victorian era. Readily available in a staggering array of forms from flypaper to cosmetics, it was comparatively difficult to detect. A tasteless, odourless compound, its effects could often be written off as food poisoning, making foul play harder to trace. Its popularity led to the Arsenic Act of 1851, which enforced tighter restrictions on its sale and required most arsenic to be coloured indigo to make it harder to disguise. Measures like this, as well as development in the fields of toxicology and pathology, marked the beginning of a decline in the poisoner’s free-for-all of the early 19th century. With poisons becoming more easily traceable and mass media broadcasting their effects more widely, old favourites such as cyanide, strychnine and arsenic gradually became less commonly used. However new drugs and new poisons were developed, with figures such as the notorious Doctor Crippen representing further flowerings of disturbing invention on the 19th century murder scene.

Posted by Margaret.Makepeace at 09:00:00 in Crime , Domestic life , Health , Science and environment