Engineering a career in India, part 2

Dipping into another part of the surviving records of the India Public Works Department enables us to enhance the picture of the lives of engineering students on the cusp of careers in India that we began in May this year.

In this instance we fast forward to 1912 and specifically to the report of the Committee which recommended suitable candidates for posts in the sub-continent. H.S. Barnes, John W. Ottley and Alexander R. Binnie had been informed by the authorities that there were a total of nineteen vacancies to be filled in government service that year. A gratifyingly large number of applications were received, and accordingly over four days in late May and early June they interviewed 92 wannabe engineers. (It would have been more, but 35 applicants were found not to have the appropriate qualifications, six withdrew their applications and three were unable to attend.)  Unsurprisingly all were men; the great majority were British, but sixteen Indian candidates also put themselves forward, probably knowing that a small proportion of the available posts had to be filled by non-Europeans. The Committee could not resist making the rather patronising comment that “We are glad to record that the standard attained by the native candidates who appeared before us showed a marked improvement this year”. 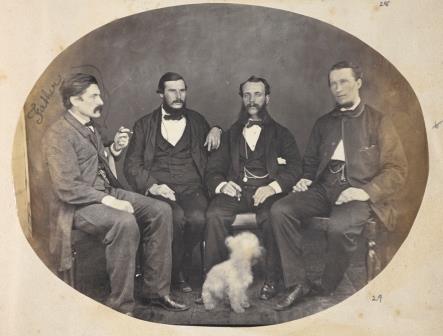 The file includes an example of the four-page form which each candidate had to fill in. As well as the standard boxes for full name, details of education from the age of fifteen and the names of up to three referees, etc., the form demanded details of the profession or occupation of his father, and even the parentage of each parent. There was also the requirement to divulge “the names of any near relatives who have been, or are now, in the service of the Indian government.” (Whether this encouraged or discouraged nepotism is no doubt a moot point.)

When the dust settled seventeen British and two Indian candidates were deemed to have passed, subject to a medical examination and their providing proof of age, and their full names, dates of birth and tertiary education are listed in the file. The Committee was prudent enough to select a reserve list of eight Europeans and four Indians, and their details are given in order of merit. Eight of the lucky nineteen were to be on one year’s probation after their arrival in India; it was recommended that six “be favourably considered in connection with the applications to State Railways”; three had the more dubious honour of being considered best fitted for careers in sanitary engineering.

There is one final observation to be made. Why, one wonders, were no fewer than three out of the nineteen successful applicants – Alfred Stuart Manger, Kenneth Eustace Lee Pennell and Francis Vaughan Simpkinson – holders of Third Class degrees in Cambridge University’s  Mechanical Science Tripos?’