Finding Indian soldiers who served in World War One

Finding information in the India Office Records about the native soldiers serving in the Indian Army is very difficult. With a growing interest in genealogy in India and Pakistan and the Asian community here in Britain, we receive more and more enquiries relating to Asians. In most cases we are unable to help as the biographical records relating to native Indians were not generally sent to London, but there are exceptions.

At a time when many people are looking for their ancestors fighting during the First World War, the Casualty Appendices to the War Diaries are a great source of information for Indian soldiers who were killed or injured.

There are dozens of volumes covering various fronts:  France, East Africa, Egypt, Aden and Persia. Strangely there are not any casualty appendices for the Force D station in Mesopotamia. The War Diaries exist for the force, but it is quite difficult to extract the names of the killed and wounded. The volumes are not indexed, so it might take days to find a soldier.  The fact that some deaths are reported much later adds yet one more obstacle. 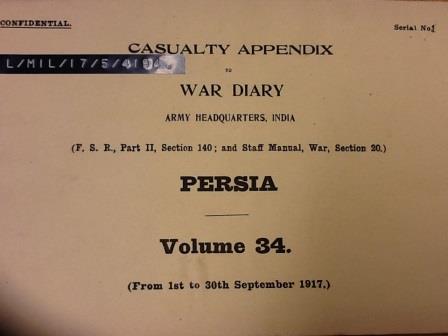 The entries are brief, but give the most important details: name, rank, regiment, whether killed or wounded, cause of death and the date. All ranks are included: the death of Sepoy Bharat Singh of the 16th Rajputs was recorded on 12 September 1917. Even followers are listed, for example Naik Moonsamy of the 23rd Field Veterinary Section, who died of acute lobar pneumonia at Ronen on 3 July 1916.

There are weekly summaries of casualties and losses from particular actions,such as Nanyati on 5 August 1917. 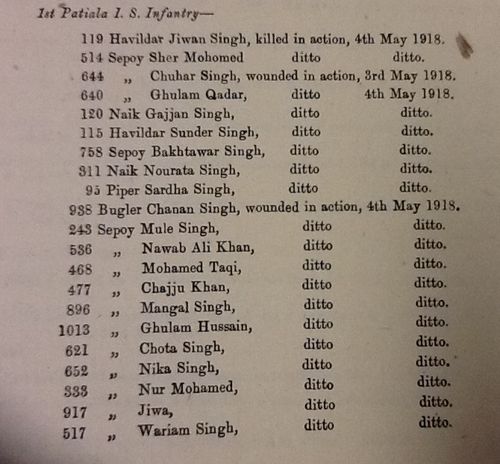 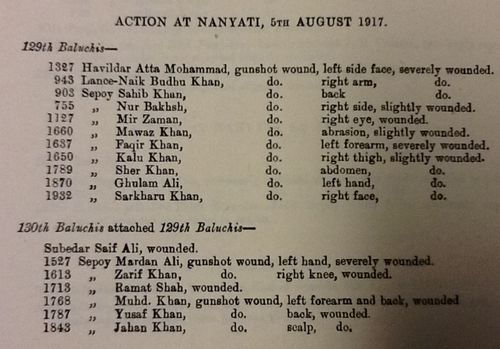 There are reports of deaths that occurred years earlier.  In telegram No. 244-A, which was sent on 7 October 1917, Subadar Ramji Savant witnessed that Private Ismail Khan died at Karagoro in January 1915 and Private Suleman Khan died in November 1915 at Tabora. They were prisoners of war in German East Africa.

There are also accounts of casualties by regiments: 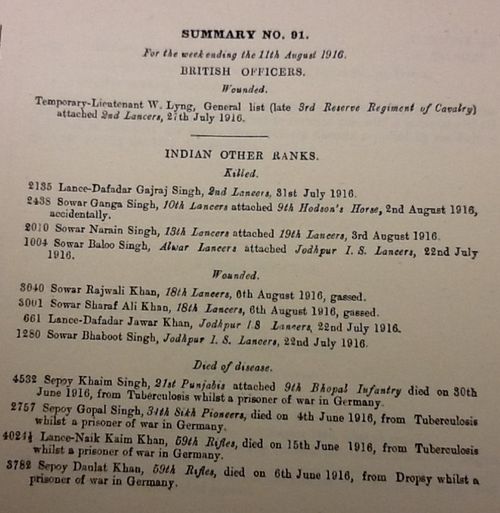 Not all news was bad news. For example Sepoys Firoz Khan of the 51st Sikhs and Indar Khan of the 53rd Sikhs were removed from the dangerously ill list on 25 August 1915 and Havildar Mohammed Ali of the 17th Infantry was invalided to India in August 1917 because of  problems with his ankle.