In 1846 Samuel Blakey was elected guardian of the poor for the Lincoln Union. In 1864 he was summoned by poor law officials from St John Hackney in London to explain why he should not contribute towards the support of his daughter Susannah and her two children.

Samuel Blakey was a farmer in Scothern, Lincolnshire before selling up in 1849 to move to Potterells Farm in North Mimms Hertfordshire. On leaving Scothern he auctioned 338 sheep, 30 ‘beasts’, and five horses, together with grassland, farming implements, and part of his household furniture.  He was twice married and had many children. 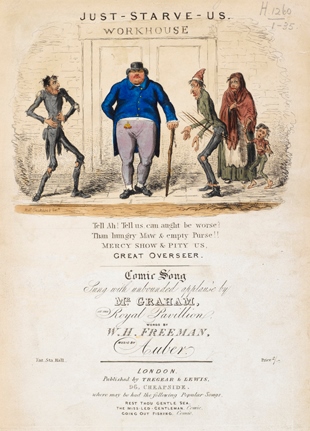 When he appeared at Worship Street Police Court in August 1864, Samuel Blakey, ‘an elderly and healthy-looking person of gentlemanly exterior’, was said to be a man of wealth and substance, farming about 300 acres in North Mimms as well as owning other property.  The parish of St John Hackney had written to tell him that his daughter Susannah Heath was being given relief and asking for some financial arrangement to be made.  Samuel had not replied.

Susannah Heath, ‘a lady-like but manifestly suffering woman’, explained her situation to the court.  Her husband William had died of consumption three years earlier leaving her with two children. Emily aged seven suffered from a ‘scrofulous complaint of the hip’ and Sidney aged two and a half was consumptive. Susannah herself had ‘an internal disease of a peculiar nature’. She sold ‘trifling articles’ such as mustard and starch, earning anything between 3d and 3s a week.  The parish provided her with tea, sugar, and bread.  Occasional small sums of money sent by her father and other relatives had all been spent.

The parish relieving officer reported that he had found the family in want living in a miserable room in St Thomas Square Hackney. The magistrate asked what order he was expected to make: the clerk to the parish trustees replied ‘Such only, sir, as shall keep the family off our hands merely’. When Samuel was asked by the magistrate how much he was willing to give his daughter, he claimed that he could not afford to allow her anything more. He had a large family to keep from a farm of 360 acres of bad land and needed to borrow money to carry on his business. However, the officer who delivered the warrant to attend court reported that everyone in the North Mimms area said that Samuel was wealthy and kept a carriage and horses. Samuel was said to look astonished at this.

Samuel was ordered to pay Susannah 10s weekly, 5s for herself and 2s 6d weekly for each of her children, together with the expenses of the hearing.  The magistrate ruled that the order could be rescinded if Samuel could show that the representation of his ‘position and sufficiency ‘was false. Samuel responded: ‘I must sell the farm. I must sell the farm’.

Posted by Margaret.Makepeace at 09:00:00 in Conflict , Domestic life , Health