Today marks the 100th anniversary of the award of the Victoria Cross to the first soldier of the Indian Army.  Born in 1888, in the village of Dab in the Chakwal District of the Punjab, Sepoy Khudadad Khan was a machine gunner in the 129th Duke of Connaught’s Own Baluchis. 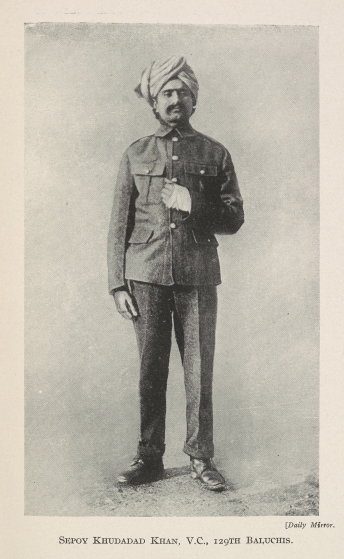 The action in which Khudadad was to be awarded the VC took place during the First Battle of Ypres, in which the Allied forces attempted to prevent a German advance to the coast to seize possession of the Channel ports and cut the British supply lines. The 129th Baluchis were part of the Lahore Division, which reached Marseille at the end of September 1914, and were immediately put into the front line near the strategically important town of Ypres. In this opening stage of the First World War, the very static trench warfare which was to characterise the conflict on the Western Front had not yet developed, and the front line was very fluid. Communications were difficult, the terrain was water-logged and offered little natural protection, and small units could easily find themselves surrounded by enemy positions. 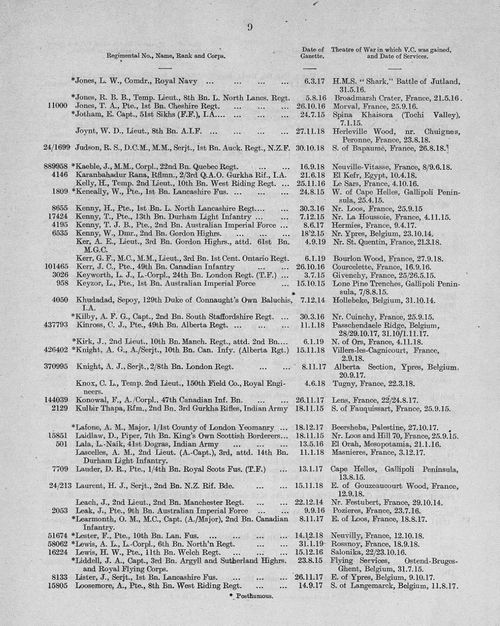 On 31 October 1914, the 129th Baluchis were engaged in heavy fighting around the Belgian village of Hollebeke, in the course of which two machine gun crews of the Regiment were cut off. One of the machine guns was destroyed by a shell, and its crew killed or wounded. A short time later, the British officer Captain Dill was severely wounded. Despite being wounded himself, Khudadad kept working his gun with the other men of his gun detachment until they were rushed by the enemy in overpowering numbers. All were killed except Khudadad, who was left for dead. Amazingly Khudadad survived this attack, and under the cover of darkness was able to crawl back to the safety of the Regiment. 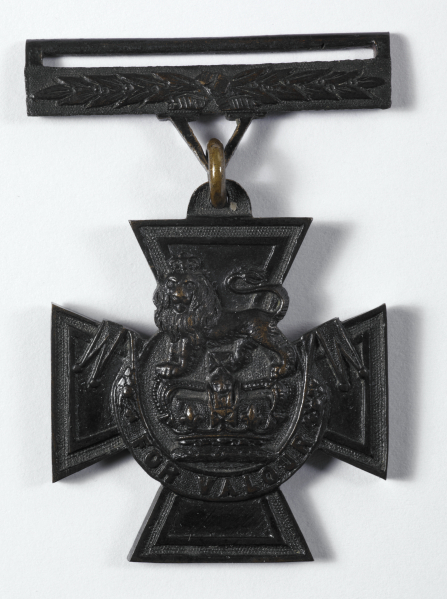 The other members of Khudadad’s machine gun crew were posthumously honoured. Havildar Ghulam Mahomed was awarded the Indian Order of Merit, while Sepoys Lal Sher, Said Ahmed, Kassib and Lafar Khan were awarded the Indian Distinguished Service Medals. Captain Dill was posthumously awarded the Distinguished Service Order. The 129th Baluchis fought in several battles during the First World War, including at Neuve Chapelle, suffering a devastating 3585 casualties out of the 4447 men who served in the Regiment during the war.

Khudadad was treated for his injuries at one of the Indian hospitals in Brighton. He survived the War, and returned to India. He died in Pakistan in 1971.

The V.C. and D.S.O. A complete record of all those officers, non-commissioned officers and men of His Majesty’s Naval, Military and Air Forces who have been awarded these decorations from the time of their institution, with descriptions of the deeds and services which won the distinctions and with many biographical and other details, edited by the late Sir O'Moore Creagh and E. M. Humphris (London: Standard Art Book Co., 1924)

A Matter of Honour. An account of the Indian Army, its officers and men., by Philip Mason (London: Jonathan Cape, 1974)

Lives of the First World War