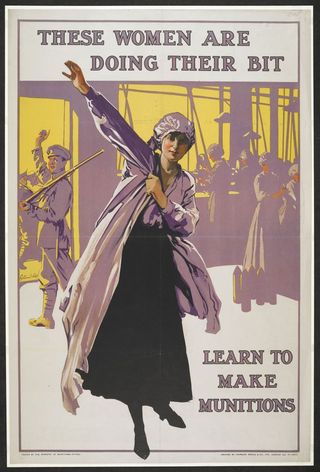 The contribution of women during the First World War, whether as munitions workers, members of the Women’s Land Army, determined knitters or sustaining correspondents, is commemorated in our current exhibition Enduring war: grief, grit and humour. One of the individual women featured is Albinia Wherry (1857-1929) whose collection of posters and postcards, donated to the Library, includes material relating to the Women’s Emergency Canteen in Paris which you can see in the exhibition.  (Now extended until 26 October!)

These women are doing their bit: learn to make munitions. Poster [London, 1916]

Over the course of the war, it provided meals, drinks, cigarettes, magazines, washing facilities and sleeping accommodation for Allied troops. An illustrated account of the canteens in France compiled by Josephine Davies (Work of the Women’s Emergency Canteens in France) gives a flavour of what life was like and the hectic nature of the work especially in the period when the ambulance trains were routed through the Gare du Nord. The chapter on the Paris canteen includes a description of the wonderment of a soldier when he descends the gloomy stairs to find a huge hall, hung with flags and bunting, the inviting smell of sausages and a ready welcome. This sense of the warmth of the welcome is also reflected in the comments quoted by Davies from the Visitors’ Book which include the following accolade: “the most homely place I’ve been in since leaving my home in 1914”.

Albinia Wherry worked at the Paris Canteen from 1915 to 1918 and is recorded in Davies as one of the Paris workers who had been awarded a badge for her service there. Postcards from her collection relating to that period feature both in Enduring war and in the related display Postcards, stamps and covers from the First World War (in the Philatelic Exhibition space on the Upper Ground Floor) and colleagues have posted in our European Studies blog about some of the French posters and Russian postcards from her collection.

Albinia was the daughter of Robert Needham Cust the orientalist (whose diaries are held by the Library: Add MS 45390-45406) and Maria Adelaide Hobart. In 1881, she married George Edward Wherry, a surgeon at Addenbrooke’s Hospital in Cambridge and a member of the Alpine Club. Her own wide range of interests is reflected in her pre-war publications, including several about art which were aimed squarely at both school children and the lifelong learner. Some biographical material, including a photograph and a family tree, can be found in The Albinia book (about women named Albinia descended from Albinia Cecil), a work she compiled with her cousin Albinia Stewart but which was published posthumously, with the assistance of her brother Robert Henry Hobart Cust, following her death in a car accident in 1929.

See our blog about Sophia Duleep Singh to learn about another remarkable woman who worked for the welfare of soldiers during the First World War.

Explore over 500 historical sources from across Europe, together with new insights by World War One experts in our World War I online resource