The Euphrates Expedition of 1836: Ingenuity and Tragedy in Mesopotamia

On 14 March 1836, the German naturalist Doctor Johann Wilhelm Helfer and his wife, Baroness Pauline Desgranges, arrived on the banks of the Euphrates near Birecik in present-day Turkey. The couple were travelling from Prague to Calcutta, and had arranged to descend the Euphrates to the Persian Gulf on board a British steamship. Steamers Euphrates and Tigris passing Thapsacus. From Chesney, Narrative of the Euphrates Expedition (1868).

In his wife’s memoirs, Johann Helfer recalled the scene of ‘busy confusion’ that greeted them that morning: ‘Turks and Christians were seen everywhere, laden with the most various things, and all in such haste’. Scattered about the banks of the river were, amongst other things, anvils, bellows, gun carriages, wheels, cylinders, trunks and chests, astronomical instruments, tent poles, ‘and an immense quantity of planks’.

Laid up by the side of the river were two steamships, the Euphrates and the Tigris, both of which had been transported from Liverpool in kit form. British engineers took a year to assemble both vessels in preparation for what was to be the first navigation of the Euphrates by steamship, from Birecik to the Persian Gulf, a total distance of 1400 kilometres.

In charge of the expedition was Captain Francis Rawdon Chesney who had occupied himself much with the question of establishing a trade route between Britain and India that avoided rounding the Cape of Good Hope. Chesney had negotiated the Euphrates by sail boat in 1834, and was confident that the great river was navigable by steamship.

Chesney’s project attracted the interest of the British Government. Since the Napoleonic wars, mail had travelled from India to London through the Persian Gulf, and then onwards, overland, through Mesopotamia (Iraq) and Syria. Government officials, reasoning that transporting goods along a similar route could bring great economic and practical advantages to the British Empire, awarded Chesney a grant of £25,000 (more than £2 million in present day terms) to undertake an expedition to establish a steamship route on the Euphrates.

The expedition’s progress downstream was slow, arduous, and not without tragedy. On 21 May 1836 a tornado wrought considerable damage upon both steamers,  causing the Tigris to sink with the loss of twenty-two hands. Finally, after three months, the Euphrates alone entered the Shatt-al-Arab, where the Tigris and Euphrates rivers meet the Persian Gulf. 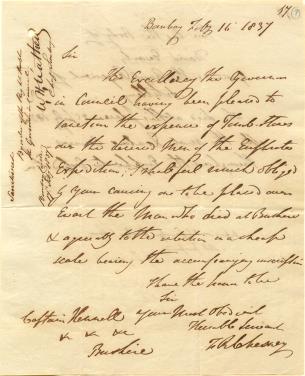 In his subsequent report to Government, Chesney insisted that his expedition had been a success, and that the Euphrates was navigable by steamship. However, a further expedition in 1841 concluded that, because of the numerous irrigation dams and other obstacles that emerged during the river’s low season, the Euphrates as a trade route was impractical. The opening of the Suez Canal in 1869 put an end to any ideas of transforming the Euphrates into a major trade route between Europe and Asia.

IOR/R/15/1/73 ‘Letters Inward 1837’.  For example - letter from Francis Rawdon Chesney to Samuel Hennell, Resident at Bushire, dated 16 February 1837, stating that the Governor in Council has sanctioned the expense of tombstones for the deceased men of the Euphrates expedition (IOR/R/15/1/73, ff 7-8)

Chesney, General Francis Rawdon. Narrative of the Euphrates Expedition carried on by Order of the British Government (London: Longmans, Green and Co., 1868)

Pauline, Countess Nostitz. The Travels of Doctor and Madame Helfer in Syria, Mesopotamia and Burmah and Other Lands (London: Richard Bentley & Son, 1878)

Posted by Margaret.Makepeace at 09:00:00 in Commerce , Innovation , Journeys , Qatar , Science and environment