Lance-corporal Allan Leonard Lewis was the only soldier born in Herefordshire to win a Victoria Cross during the First World War. But, as an adopted Welshman, his heroism is not acknowledged at all in Neath where he lived before the war. He is one of Wales's war heroes, and yet his sacrifice is not officially recognised in the place where he worked and joined the army. 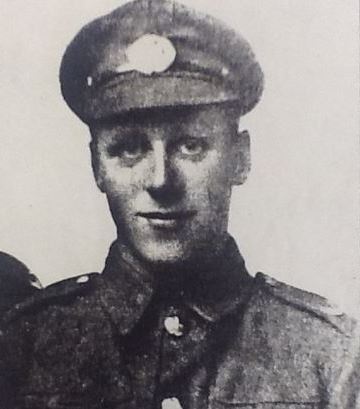 Tragically, Allan Lewis was awarded the VC posthumously because he was killed in action, aged 23, at Ronssoy during the battle of Epehy on 21 September 1918. His award was for 'most conspicuous bravery'.  First, on 18 September 1918, he was in charge of an advancing section of the 6th Battalion, Northamptonshire Regiment which was held up by ferocious machine-gun fire as it attacked outposts of the Hindenburg Line.

The official citation reports that, after observing how two enemy machine-gun teams were pinning down his men, Lewis 'crawled forward, single-handed, and successfully bombed the guns, and by rifle fire later caused the whole team to surrender, thereby enabling the whole line to advance.'  This in itself was bravery of the very highest order, but Lewis was not finished.  The London Gazette reported that three days later he 'again displayed great powers of command'. Unfortunately, though, 'having rushed his company through the enemy barrage' he was killed 'while getting his men under cover from heavy machine-gun fire.' 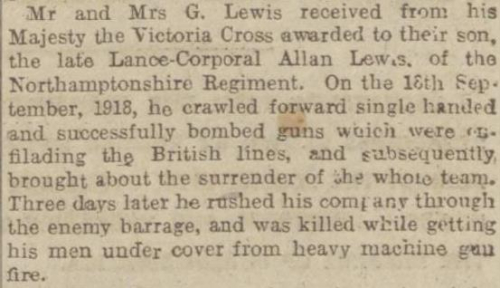 By any standards, Lewis's actions at Ronssoy were remarkably brave, and he made the ultimate sacrifice in order to protect his men.  But the fact that his heroism is not noted at all in Neath, or indeed anywhere else in Wales, adds an even greater level of interest and poignancy to his story.

Although Allan Lewis was born just over the border with England, at Whitney-on-Wye, he was in many ways a Welshman, so much so that he had attempted to learn Welsh.  One of nine children, he had left school at thirteen to work on the land, eventually becoming a gardener at Truscoed House near Llandeilo in West Wales.

Lewis always enjoyed working with machines, though, and this led to him becoming an employee of the Great Western Railway.  He moved to Neath, and, after a period as a conductor, he drove a GWR bus on the Pontardawe route.

So, with such strong roots in Neath, why does he remain a forgotten hero, even in his adopted home town?

Tireless research and campaigning by Mr Vyvyan Smith over the past forty years provides us with an explanation.

Lewis joined the army in Neath in March 1915 and in doing so he left his job without seeking official permission from his employer.   This seems to have been too much to bear for the managers of the GWR, and they long harboured a grudge against the man who was to die seven weeks before the end of the war.

Indeed, not even the award of a posthumous VC served to change their minds. Other GWR employees who won a VC had locomotives named after them, but this honour was never afforded to Lewis.

This extraordinary attitude clearly affected perceptions of Lewis in Neath where his name is not included on any civic war memorial. Surely, it is now time to acknowledge the significance of Allan Leonard Lewis VC, a Welsh hero who gave his life for his country.

The V.C. and D.S.O. A complete record of all those officers, non-commissioned officers and men of His Majesty’s Naval, Military and Air Forces who have been awarded these decorations from the time of their institution, with descriptions of the deeds and services which won the distinctions and with many biographical and other details, edited by the late Sir O'Moore Creagh and E. M. Humphris (London, 1924)