The Slave Trade at Aden, Part 1

The records of the Board of Control, the Government body set up in the late 18th century to supervise the activities of the East India Company, contain collections of correspondence relating to kidnapped Indians, often children, who were sold as slaves along the coasts of the Red Sea and the Persian Gulf. The Government of India was keen to close down this disturbing trade and the correspondence which flowed between Calcutta, Bombay and British officials in Aden and the Gulf show the different measures taken to protect children from slavers, and to reunite those rescued from slavery with their families in India.

However, this could be a difficult undertaking, as the case of a boy named Nusseeb illustrates. The case was initially investigated in November 1843 by J H Patton, Chief Magistrate of Calcutta, who acting on information received from Captain S B Haines, Political Agent at Aden, found Nusseeb on board the ship Aden Merchant which was in the port of Calcutta at the time. In a statement, Nusseeb gave his age as 16 or 17, and denied that he was a slave. He claimed that two years previously he had been the slave of a man name Ali Ibn Hamid in Aden, but that he was badly treated and so ran away. He then freely offered his services as a khalasi (a dockyard worker or sailor). He stated that he shipped aboard the Aden Merchant at Aden in the summer of 1843 on wages of 6 rupees per month, and that he was happy on board the ship, had plenty to eat and drink, and was never ill-treated. Several of his shipmates, including Ali Abdullah, the supercargo of the ship, also gave statements that Nusseeb was a free member of the crew. 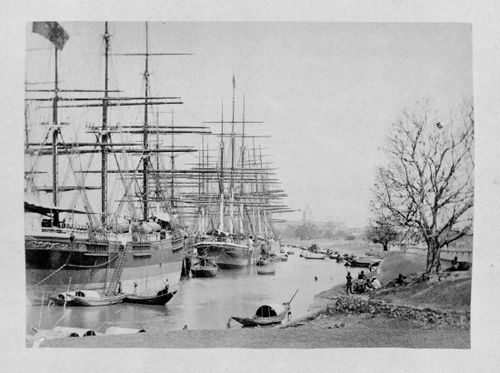 Banks of the Hooghly at Calcutta, with the court house in the distance c1872 Photo 179/(4) Images Online

This information was relayed back to Captain Haines in Aden, who was clearly angered by the lack of success of Chief Magistrate Patton in prosecuting Ali Abdullah for slave-dealing. Writing to the Secretary to the Government of Bombay, Captain Haines stated that it was “an incontrovertible fact known now to all Aden” that Ali Abdullah had purchased Nusseeb from Ali Ibn Hamid for 35 German Crowns. Captain Haines claimed also to have discovered that Ali Abdullah had purchased other slaves, whom he had then mixed with the crew, unknown to the principal owner of the ship, and further that he had charged the owner for them as lascars. He pointed out that the evidence gathered by Chief Magistrate Patton was “…from parties more or less likely to be involved in difficulties if any facts were revealed”.

Unhappy with this outcome, the Government of Bombay gave instructions to Captain Haines to begin a full and careful enquiry into the charge against Ali Abdullah on his return to Aden, and also into the circumstances under which he had become possessed of other slaves. The results of that enquiry will be the subject of the next Untold Lives posting.

Slave Trade, Vol 3: Proceedings regarding the charge of slave dealing against Ali Abdulla, the supercargo of the barque called the Aden Merchant, in the case of a boy named Nusseeb, who Ali Abdulla allegedly purchased from Ali Ibn Hamed of Aden, reference IOR/F/4/2066/94848 pp.1-28.

Slave Trade, Vol 6: correspondence relating to the slave trade in the Red Sea and the Persian Gulf, reference IOR/F/4/2066/94851.

Read our story about slavery in Muscat

Posted by Margaret.Makepeace at 09:00:00 in Conflict , Journeys , Slavery