The Slave Trade at Aden, Part 2

We continue our story of the young man named Nusseeb, who was alleged to have been purchased as a slave by Ali Abdullah, supercargo of the ship Aden Merchant, and of the enquiry ordered into Nusseeb’s case by the Government of Bombay.

When the Aden Merchant, renamed Seaton, arrived back in Aden from Calcutta, Nusseeb was not on board. Captain S B Haines, Political Agent at Aden, denied the ship permission to leave Aden, and questioned relevant witnesses about their knowledge of Ali Abdullah and Nusseeb. Ali Abdullah himself refused to answer Captain Haines' questions, simply saying “… you are a father to all and I am your son, and you know I was tried in Calcutta. I have therefore nothing more to say”. 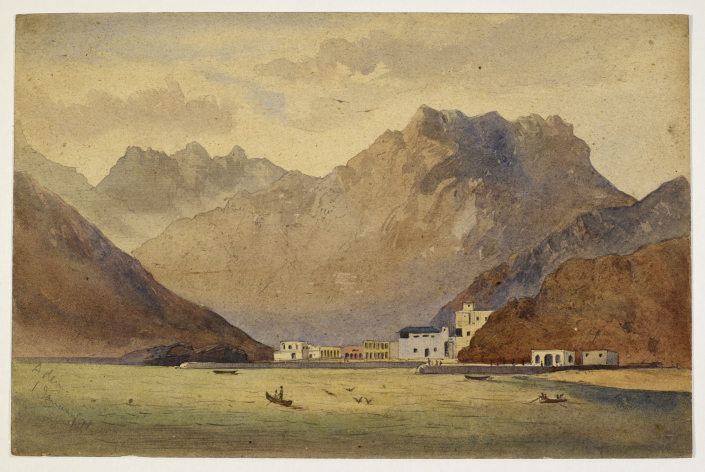 In his report to Government, Captain Haines gave a description of Ali Abdullah which is worth quoting in full: “Ali Abdullah is about 40 years of age, tall for an Arab, and muscular; and evinced great bravery during various skirmishes with the Arabs, prior to the capture of Aden by the English, being then Governor of the Town, and afterwards appointed Arab Custom Master by Government, an Office he held with credit for three years”.

Although none of the witnesses could give the whereabouts of Nusseeb, Captain Haines discovered that Nusseeb and the other alleged slaves had been sent from Calcutta to Jeddah on board another ship sailing under Arab colours.

The Bombay Government accepted that the evidence taken by Captain Haines bore much against Ali Abdullah, and they saw the absence of Nusseeb from the ship on its return to Aden as strong proof in favour of the testimony of those who claimed to have witnessed his purchase. However, the Government was very unhappy with Captain Haines' examination of the witnesses, describing it as not only very loosely but carelessly taken, and describing his investigation as having “…been conducted in a manner which would reflect but little credit on any court of justice”. Captain Haines was admonished that he should have tried Ali Abdullah on a charge of slave-dealing, and was ordered to do so.

Just over three months later, on 24 August 1844, Captain Haines sent a report of his attempts to bring Ali Abdullah to trial. Unfortunately, the witnesses previously interviewed by Chief Magistrate Patton at Calcutta had since travelled to Jeddah, where they had dispersed, and they were not expected to return to Aden. Worse still, the boy Nusseeb could not be located in Jeddah by the British Consul residing there, and his whereabouts could not be discovered. With an absence of witnesses and conflicting testimony from the investigations in Calcutta and Aden, Captain Haines felt he had little choice but to come to a verdict of not proven and recommended that the case be dismissed. The Government of Bombay agreed with that decision.

Slave Trade, Vol 3: Proceedings regarding the charge of slave dealing against Ali Abdulla, the supercargo of the barque called the Aden Merchant, in the case of a boy named Nusseeb, who Ali Abdulla allegedly purchased from Ali Ibn Hamed of Aden [IOR/F/4/2066/94848 pp.1-28].

Read our story about slavery in Muscat.

Posted by Margaret.Makepeace at 09:00:00 in Conflict , Journeys , Slavery