The modern Santa Claus originated in the New York area where he evolved from Dutch gift traditions surrounding St Nicholas.  His name, spelt Sancte Claus, first appeared in print in a poem in the New York Spectator in 1810.

But it was another poem that helped spread his fame.  What became known as Twas the Night before Christmas was probably written by Clement Clarke Moore and quickly became popular after being published anonymously in 1823.  Although it refers to him as St Nicholas rather than Santa Claus, the poem helped fix the idea that he was a plump, jovial figure with a sleigh and reindeer.

The first mention of Santa Claus in the British Library’s British Newspaper Archive comes from Wick in Scotland in 1852, where children told a reporter that he filled the stockings they hung by the fireplace with presents. But how Santa made his way across the Atlantic and then established himself in Britain is unclear. His tale may have spread via the letters home of those who had emigrated to the States.  Some may have enquired after the meaning of the American ship Santa Claus that visited England in the early 1850s or the 1860s' racehorse of the same name.  British newspapers reproduced Moore’s poem a number of times from as early as 1855.

Books also played their part in spreading his fame and encouraging children to hang stockings. In 1853 an American short story by Susan Warner entitled ‘The Christmas Stocking’ was published in London. It was performed at penny readings, and at least five editions of it were published in Britain in the next three years.

His trip across the Atlantic did not leave Santa Claus unchanged. In Scotland, his gift deliveries were often made at Hogmanay.  Most importantly, he often found himself merged with Father Christmas, an unruly and sometimes even debauched figure who had long since symbolised festive celebrations in England.  The two names quickly became interchangeable but Santa Claus was the most commonly used, perhaps until as late as the 1950s when the middle classes became more sensitive about the Americanisation of popular culture.

Shops adopted Santa Claus and used him to sell their festive wares and by the 1890s it was possible to visit him in department stores.  Advertising, like storybooks and Christmas cards, also began to show people what he looked like.  Whereas in America he tended to wear a suit, in Victorian Britain he was usually depicted in a long robe. Nor was it always red, although that colour did predominate long before the interwar Coca-Cola advertisements that are sometimes thought to have changed his sartorial preferences. 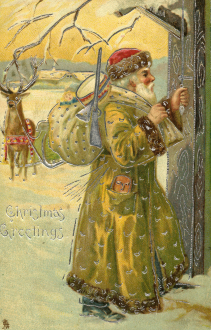 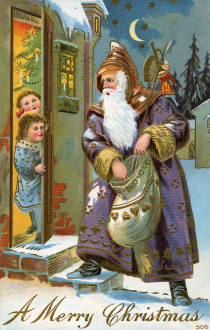 Santa was an ideal way to indulge the growing Victorian reverence for the innocence of childhood. It also had the practical benefit of helping control children’s behaviour.  The mix of commercial and cultural pressures meant that by the end of the 19th century a majority of middle-class families were playing along. So, too, were some working-class ones, although economics curtailed his visits to the poorest of society, causing consternation amongst their children.

Santa Claus’s Victorian journey from the USA to the heart of the British Christmas remains shrouded in some mystery. Newspaper digitisation is allowing that journey to be better charted.  Yet, undoubtedly, hidden in the millions of the British Library’s Victorian pages are further clues as to how he came to, as one 1931 writer put it, ‘reign all over Christendom as the King of Christmas’.

Martin is currently writing a history of Christmas in Britain since 1914 and his previous publications include Wales Since 1939 (Manchester University Press, 2012).

Posted by Margaret.Makepeace at 09:00:00 in Domestic life , Journeys