Christmas Eve in Dubai. What could go wrong? In 1910 – plenty. On 24 December of that year the British launched what should have been a routine operation to confiscate ‘illegal’ weapons in the Trucial Coast port. The result was a running gun battle, a naval bombardment and numerous deaths, which became known as the Dubai Incident.

It started when HMS Hyacinth, on patrol off the Trucial Coast, which was bound to Britain by treaty obligations, received reports of an arms cache at Dubai. The British had been asked by the Persian Government to intercept arms trafficking to Persia from the Arab side of the Gulf, although the ultimate destination was probably India’s North West Frontier. The commander of the Hyacinth, Captain J D Dick, immediately organised a landing party consisting of men of the Royal Navy and Royal Marines. 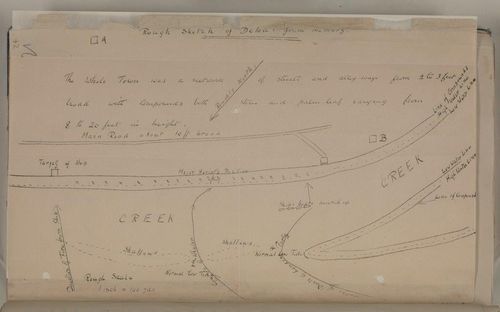 On arrival at Dubai, Dick, who led the landing party in person, expected to meet the Sheikh of Dubai, but when the Sheikh failed to appear, he decided to press on. The party made their way through the network of narrow streets to one particular house. Here, on excavating the floor of a room, they found three old rifles ‘of an obsolete pattern’. Half the party then pressed on to a second house, but before long shots were heard, and armed Arabs were seen running in the streets. In the fire-fight that followed, five members of the British landing party and twelve Arabs were killed. As the landing party withdrew, the guns of the Hyacinth opened up to provide cover, firing six inch shells, which caused the deaths of a further 25 local people. It was said by the British that when the Sheikh of Dubai did appear, he was quickly able to control the firing on his side.

Following the incident, the two senior British officials in the region, Lieutenant-Colonel Percy Cox, the Political Resident in the Persian Gulf, and Rear Admiral Edmond Slade, Commander in Chief, East Indies Station (whose daughter Madeleine became an associate of Mahatma Gandhi and supporter of Indian independence) rushed to the area and interviewed the Sheikh of Dubai aboard the Hyacinth. They proceeded to impose a number of punitive demands on the Sheikh, including the handing over of 400 serviceable rifles and the payment of a fine of 50,000 rupees, the return of which was to depend on the Sheikh agreeing to the installation of a British Agent and his military guard in Dubai (if necessary by means of a further bombardment). The Sheikh, while complaining that the British ‘began slaughtering and killing my men’ as soon as they arrived, handed over the rifles and money, but baulked at the installation of an Agent. 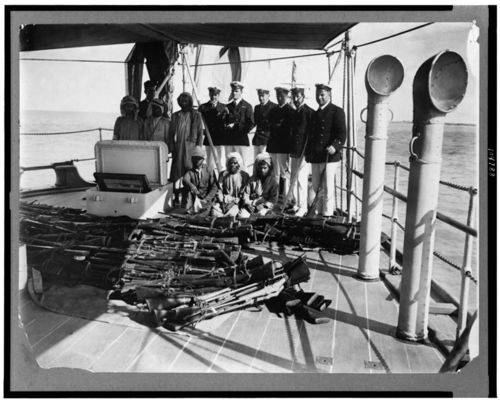 Photograph said to show rifles on the quarter deck of HMS Fox handed over following the Dubai Incident. Library of Congress Prints and Photographs Online Catalog

The British Government of India was, in the restrained language of the day, ‘not satisfied’ with what had happened at Dubai, saying that the decision of the commander of the landing party to press on with the search despite the fact that the Sheikh was not present ‘was likely to provoke reprisals and was hardly prudent’. They also disapproved of ‘the idea of installing a British Agent by bombardment’ (but recommended the retention of the 50,000 rupees).

Following the incident, commanders of Royal Navy ships in the Gulf were ordered to proceed with ‘extreme caution’ in all operations on shore in connection with the suppression of arms traffic. The measure was too late to avert the ‘unfortunate’ events at Dubai, but the British were clearly keen to avoid a repetition.

Posted by Margaret.Makepeace at 09:00:00 in Conflict , Politics , Qatar