Were you given a bicycle for Christmas?  Was it a Psycho bike?

The Psycho bicycle was designed by Starley Brothers, a pioneering cycle manufacturer based in Coventry. The Ladies’ Psycho had a step-through frame so that there was no need to hitch up skirts to ride.  It was the first mass-produced bicycle for women. 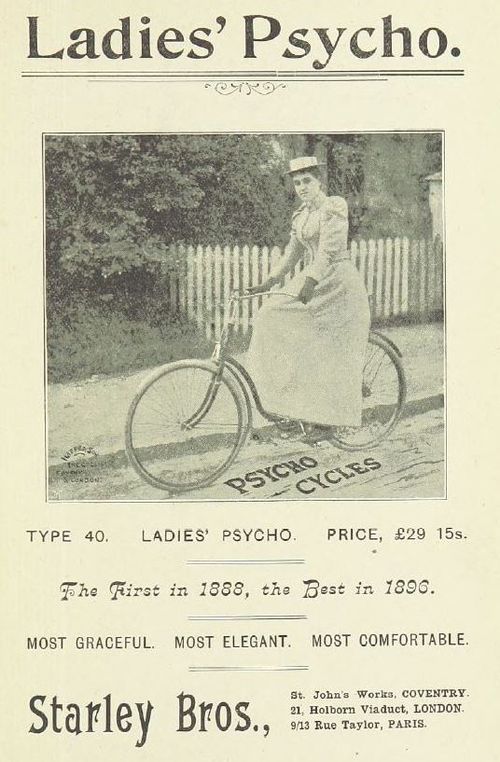 From Chilosà, Waif and Stray. The adventures of two tricycles. (1896)

James Starley was born in Sussex in 1831. He worked on his father’s farm and then as a gardener in Kent. Young James spent his spare time mending umbrellas, clocks and watches, and inventing mechanical devices such as a one-stringed window-blind, an adjustable candlestick, and a self-rocking pram (said to be guaranteed to soothe and lull the most tiresome of infants).

Starley then secured a job with a sewing machine manufacturer in London. He moved to Coventry as the mechanical genius for the Coventry Sewing Machine Company established in 1863.  This firm evolved into the Coventry Machinists’ Company making bicycles and tricycles. James Starley both designed and tested bicycles: in 1869 he and William Hillman rode from London to Coventry in one day, a gruelling journey to undertake on such an early bicycle. 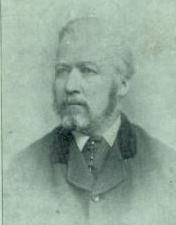 James Starley - from the front cover of The life and inventions of James Starley, father of the cycle industry (1902)

James Starley set up his own business in Coventry in 1869, manufacturing both bicycles and sewing machines. His sons James, John and William and his nephew John Kemp Starley all worked under him. It was said that James Starley so improved the bicycle that the ‘bone-shaker’ bore the same relation to the bicycle of the 1880s as a cart horse did to the winner of the Derby (Pall Mall Gazette 23 June 1881).

Queen Victoria saw a woman riding a Starley ‘Salvo Quadricycle’ on the Isle of Wight and ordered one for the royal princesses.  It was delivered to Osborne House in person by James Starley just a few months before his death from cancer in June 1881.  His obituary noted that, although successful, Starley had not made a fortune: ‘Mr Starley patented a number of his inventions; but he had little commercial keenness, and, speaking broadly, his inventive genius was freely given to the world’ (Pall Mall Gazette 23 June 1881).  His estate was valued for probate at £2322 13s 1d.  A memorial to James Starley was unveiled in Coventry on 8 November 1884. 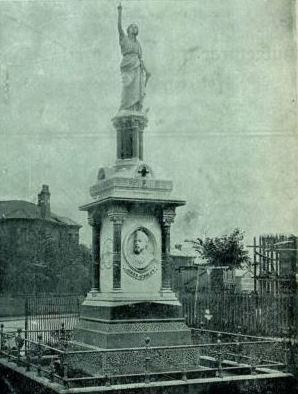 Memorial to James Starley - from The life and inventions of James Starley, father of the cycle industry (1902)

The family business continued after his death. New models such as the Psycho were developed and the firm continued to supply cycles to the royal family.  In 1900 William Starley advertised a hire-purchase scheme for men and women’s bicycles costing fourteen guineas:  ‘’the value of a really reliable bicycle is still such as to make its acquisition difficult or impossible to many who desire to ride’.  Credits were given for introducing new customers. 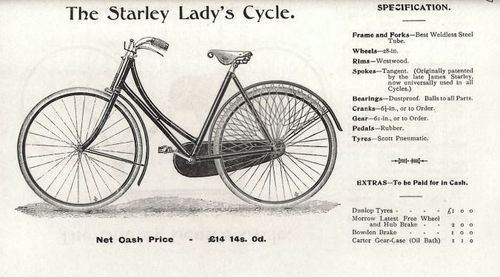 But why was the name ‘Pyscho’ chosen for the bicycle?  According to Grace’s Guide to British industrial history, the name was taken from illusionist John Nevil Maskelyne’s mechanical figure Psycho now on display at the Museum of London. 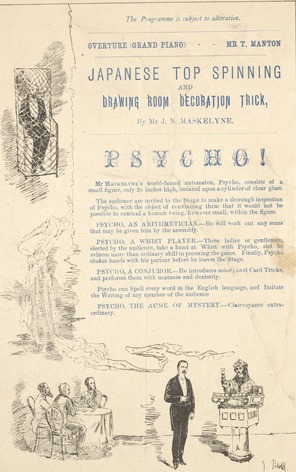 Posted by Margaret.Makepeace at 11:30:00 in Commerce , Innovation , Journeys , Leisure