The lost and found columns in Victorian newspapers offer rewards for the return of lost dogs, silver lockets, watches, overcoats, sheep, and pigeons.  But tucked away amongst these are pitiful announcements about lost children.

CHILD LOST
STRAYED, about Half-past Five o’clock YESTERDAY (THURSDAY) Evening, from Hercules Street, a LITTLE GIRL, about three years of age.  Had on a black silk dress, with a little grey stripe on the bottom; hair fair; no hat; wore boots. Information to be given at 29, Hercules Street; to FRANCIS KANE, 47, Mill Street; or the Police.
(Belfast Morning News, Friday 31 August 1866) 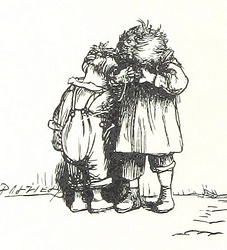 The disappearance of ten year old James Robert Leach was reported in the news columns of the Portsmouth Evening News in July 1894. James had left his home in Landport in Hampshire at about 10am on 18 July to buy a loaf and some milk. When he failed to return, his anxious parents Richard and Louisa Leach began to search for him.  They were told that their son had been seen at Hilsea with a man and woman who sold umbrellas. The police were then informed. The newspaper printed this description of the boy:

When he left home he was without boots, stockings, cap, or collar. He was wearing a brown reefer     coat with an odd black sleeve, and trousers of a dark pepper-and-salt pattern.  He is short and     small for his age, has black hair and dark eyes, and on one of his little fingers is a bony     protuberance at the lower joint.  His back is scarred with burns.

His parents advertised widely and had photographs circulated in London by the Salvation Army.  Nothing was heard until November when James was found sleeping under a hedge in Chatham in Kent. An inspector for the National Society for the Prevention of Cruelty to Children took him to the workhouse.  The poor boy thought that he had been missing for three years.

James had wandered off to play on Portsdown Hill when Thomas and Florence Cannon abducted him.  Thomas Cannon had threatened to cut his throat if he raised an alarm.  The boy was sent out to beg and thrashed if he did not take back threepence daily. His body was covered with bruises and wounds. When a School Board officer began to investigate, the Cannons took him out one night and deserted him. 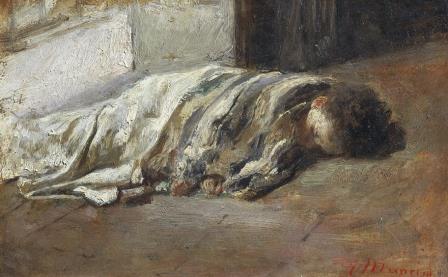 The Cannons were each sentenced to three months’ hard labour for employing James Leach for begging purposes.  At the end of their sentence they were sent back to court to face kidnapping charges but the Public Prosecutor decided not to proceed.

Sadly, our story does not have a happy ending. James Leach enlisted in the Royal Navy in 1901. He was killed on 9 November 1918 when HMS Britannia was sunk by a submarine off Cape Trafalgar. He left a widow Florence and two children.

Posted by Margaret.Makepeace at 09:00:00 in Crime , Domestic life , World War One