On 16 January 1838 a petition asking for help was composed on behalf of Elizabeth Mary Hickman of Blackfriars for submission to the East India Company.  She was the widow of Henry Hickman who had worked as a labourer in the Company warehouses for 23 years. When the Company was winding up its commercial operations in London, Henry was made redundant in March 1836 at the age of 55 with a weekly pension of 8 shillings. Elizabeth claimed that he was in a weak state of mind at that time.  Henry deserted his wife in May 1837 and she heard nothing of him until she learned in December that that he had committed suicide in Somerset.  Elizabeth had been forced to sell her furniture, clothing and other comforts to support herself and she was in great distress.  The Company gave Elizabeth a donation of £5.

Local newspapers provide the rest of this story. When Henry left Elizabeth, his fourth wife, he went to live with his son at a cottage in the forest of Neroche near Buckland St Mary in Somerset. In November 1837 he collected the quarterly instalment of his pension from a bank in Barnstaple.  Instead of paying his son for his board, he spent the money on alcohol. His son remonstrated with him, saying that he could not afford to keep his father and support a large family unless Henry contributed to household expenditure as promised.  The next morning Henry came downstairs about 8 o’clock and asked his daughter-in-law for half a pint of water. Soon afterwards she found that he had strangled himself with a noose made from his neck-cloth, garters, and braces tied to the bed. 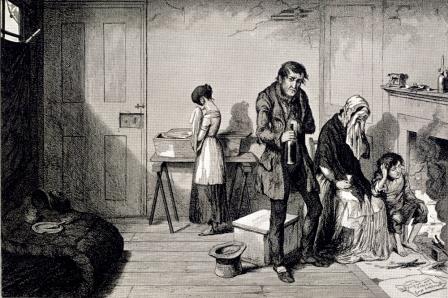 From G. Cruikshank, The Bottle, and the Drunkard's Children ( 1905) Images Online

The coroner’s inquest lasted four hours with the jury unable to make a unanimous decision on whether this was a case of suicide.  In the end, they divided: twelve declared a verdict of ‘lunacy’ and two of ‘felo de se’.  In consequence a verdict of lunacy was recorded. The Exeter and Plymouth Gazette added a postscript to this sad story:

‘It is melancholy to add, that the infatuated man, in addition to his other infirmities, repudiated the idea of the existence of a Divine Being, and always ridiculed the name of God when questioned on the subject, often expressing his entire acquiescence in the pernicious doctrines of Tom Paine, whose writings the deceased had in his possession’.

Honest and industrious – petitions to the East India Company

Posted by Margaret.Makepeace at 09:00:00 in Domestic life , Health , Journeys , Work