Opening the coffin of King Charles I

King Charles I was beheaded on 30 January 1649 outside Banqueting House in Whitehall. His embalmed body was put into a coffin and taken to St James’s. Parliament then gave permission for the King to be buried in the Chapel of St George at Windsor. Mr Herbert who had been a groom of the royal bedchamber was entrusted with overseeing the interment. 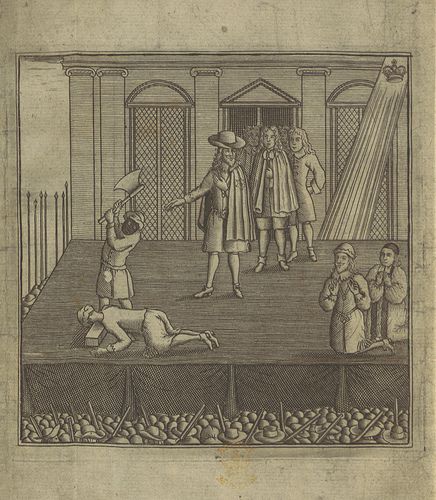 From The Famous Tragedie of King Charles I (London, 1709) British Library flickr

Lord Clarendon stated that some years later the King’s body could not be found at Windsor. There was a suggestion that King Charles II had re-interred his father at Westminster Abbey.

When George III built a mausoleum at Windsor, a passage was built under St George’s Chapel.  Workmen accidentally made an opening in one of the walls of the vault where Henry VIII and Jane Seymour were said to be buried. A third coffin could also be seen, covered with a black velvet pall. This was in accordance with Herbert’s description and so it was presumed to hold the remains of King Charles I.

The Prince Regent was told of the discovery and he sanctioned an examination of the coffin. This took place on 1 April 1813, the day after the funeral of the Duchess of Brunswick.  The Prince Regent entered the vault accompanied by the Duke of Cumberland, Count Munster, the Dean of Windsor, Benjamin Charles Stevenson, and Sir Henry Halford.  The pall was removed to reveal a plain lead coffin inscribed with the name of King Charles and the year of his death. An opening was then made in the lid and the covering removed from the head.  Sir Henry reported that the long oval- shaped face with a pointed beard bore a strong resemblance to coins, busts, and the Van Dyck pictures of Charles I.  The head was removed from the coffin to prove that it had been separated ‘by a heavy blow, inflicted with a very sharp instrument’, proving beyond doubt that these were indeed the remains of King Charles.  The rest of the body was not examined and the coffin was soldered up.

None of the other coffins in the vault had an inscription.  The coffin supposed to be that of Henry VIII was six feet ten inches in length and had been damaged, revealing a skeleton.  A smaller coffin, understood to be that of Jane Seymour, was not touched as the Prince Regent did not consider mere curiosity a sufficient motive for disturbing her remains. There was also a very small mahogany coffin covered with crimson velvet laid upon the pall covering King Charles. This contained a child of Queen Anne, still-born when she was Princess of Denmark.

Further reading:
Essays and orations, read and delivered at the Royal College of Physicians; to which is added , An account of the opening of the tomb of King Charles I  by Sir Henry Halford (London, 1842)

Posted by Margaret.Makepeace at 09:00:00 in Conflict , Politics