The Death of a Political Agent: Captain Shakespear

Today, 24 January 2015, marks 100 years since the death of colonial officer and Arabian explorer and photographer, Captain William Henry Irvine Shakespear, who died in a battle at Jarrab between the forces of Ibn Saud, the founder of modern-day Saudi Arabia, and his adversary, Ibn Rashid.

Shakespear was well aware of the dangers he faced on his Arabian explorations. A day before his final departure, he wrote to the officiating Political Officer at Kuwait:

‘In case I should get snuffed out in the desert, would you be so good as to post the enclosed two letters as soon as you hear [...] As far as my kit is concerned, it might remain until you hear from my brother - he is my executor […] I think I have left everything squared so as to give as little trouble as possible [...]’. 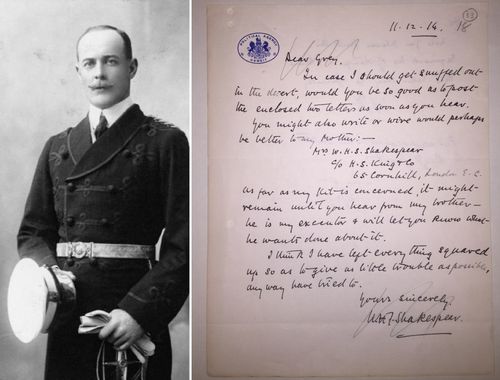 His death was first taken as rumour, but was confirmed by Ibn Saud in a letter dated 4 February 1915: ‘[…] it is a source of regret that our cordial friend and a rare well-wisher Captain Shakespear, was hit from distance by one of the enemy’s shots and died. I offer you my condolence on his death’.

Concerning Shakespear’s presence at the battle, he remarks: ‘We had pressed him to leave us before the incident; but he persisted in refusing to do so […] Amongst other remarks, he said “I have been ordered to be with you. If I leave you it would be a blemish to my honour and the honour of my Government. Therefore excuse me. I must certainly be with you”. Accordingly we allowed him (to come) in compliance with his wish’.

On 17 February, Thomas William Holderness, Permanent Under-Secretary of State for India, wrote a letter of condolence to Shakespear’s father expressing ‘sincere sympathy on the death of [his] son in action in Arabia […] on an important and delicate mission’ and conveying praise for ‘an able and gallant officer’ from the Secretary of State for India. On 22 February, Shakespear’s father responded on black-edged writing-paper thanking him for the ‘kind message of sympathy on our irreparable loss’. 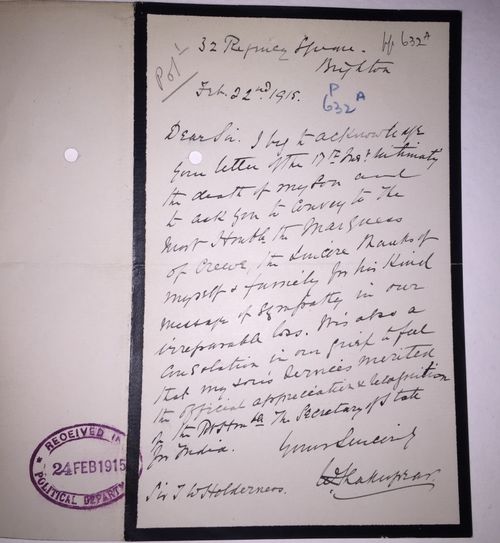 The death made news in the United Kingdom, with the Manchester Evening News reporting: ‘The intrepid Arabian explorer, Capt. Shakespear, whose death is officially announced is believed to have succumbed to wounds received in this encounter on a mission to Anglophile Ibn Saud’. Indeed, Shakespear’s death was significant enough that a question was asked about it in the House of Commons by Liberal MP Sir John Jardine. 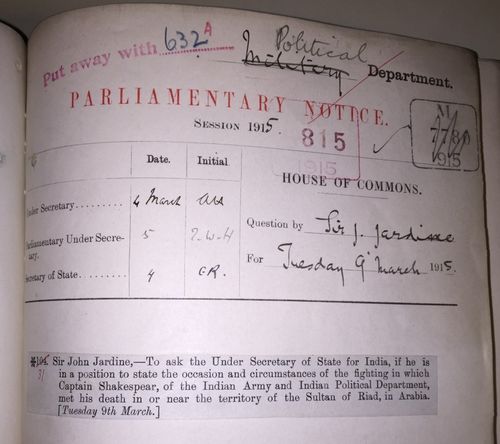 In the official account of Shakespear’s death written by Sir Percy Cox on 27 July 1915, he admits ‘[w]e shall probably never know more precisely than we do now how he actually met his death’. However, further information from an eyewitness was received and reported in May 1917 by the Arab Bulletin, an official military intelligence magazine founded by T. E. Lawrence. Shakespear was ‘with Ibn Saud’s artillery, looking through his field glasses and very conspicuous, since he was wearing full British uniform and a sun-helmet […] He was therefore easily picked out, and was shot at long range’.

Further, the political significance of Shakespear’s death in the context of the conflict between Ibn Saud and Hussein bin Ali, the Hashemite Sharif of Mecca, is mentioned: ‘His [Shakespeare’s] helmet was taken into Medina, and publicly exhibited as proof to all Moslems that Ibn Saud was a traitor to Islam, and he had permitted Christians into his country. There were great demonstrations in Medina, and the hat is still displayed in the Serai, with an inscription pointing its moral’. 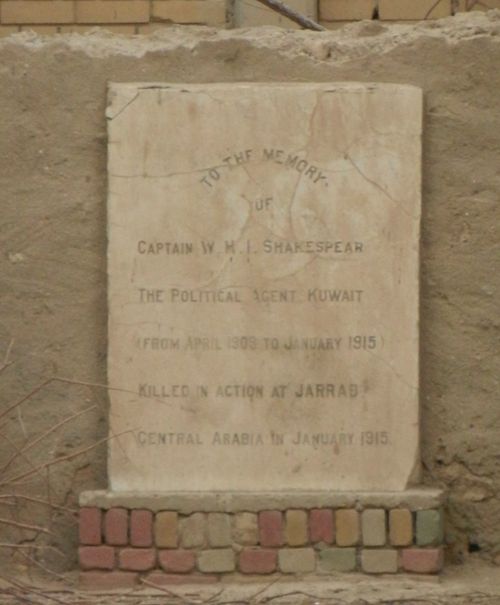 Shakespear’s memorial at the Old Jewish and Christian Cemetery, Kuwait (photo by Julia&Keld)

The Death of Captain Shakespear on the Qatar Digital Library

Tales from the other Shakespears