For seven years in the mid-19th century, the British governed India from a West End hotel. Barely two years after the administration of India had transferred in 1858 from the East India Company to the Crown, the home civil servants were looking for a home. The old East India House in Leadenhall Street was up for sale; the new India Office in Whitehall was still at the planning stage.  A decision was taken to rent rooms in a brand-new hotel close to the heart of government, the Westminster Palace Hotel. With an imposing façade extending 300 feet along Victoria Street, the hotel advertised its advantages “both to business persons and seekers of pleasure”. In 1860 the India Office took a lease on a 140-room wing at the back of the building, for £6,000 a year. There the administration remained until 1867. 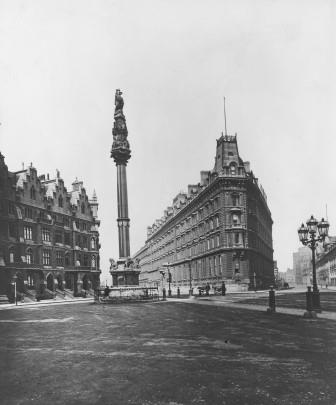 The establishment boasted the latest technology. It was the first hotel in London to install hydraulic lifts, to ‘convey the occupant of the highest floor to his resting place with as little fatigue as if he were located on the first floor’. The rooms had nevertheless to be adapted. The Surveyor to the India Office, Digby Wyatt, engaged painters, carpenters, glaziers, upholsterers, and iron-founders, to erect partitions, lay carpets, and install a complex system of messenger bells. Details of the tradesmen and their contracts appear in the Surveyor’s records in the India Office Records; they show that Wyatt drove a hard bargain on the distribution of costs between the India Office and the hotel. The architects of the hotel were proud that the building was able to meet the India Office’s requirements. In an address to the Royal Institute of British Architects, Andrew Moseley explained that the joists on the third floor comfortably supported the twelve tons of books that had been placed on them. For the civil servants, however, the noisy street and the hotel’s dark corridors were irksome. Writing in the Cornhill Magazine, the political secretary John Kaye dismissed the accommodation as ‘the fag end of a public house’.

Attached to the original lease is an unusual schedule: a bill of fare. The lease gave the hotel a monopoly on all food and drink consumed on its premises. A menu for India Office staff was drawn up, the prices pegged at ‘Treasury rates’.  The document gives an insight into the civil-service diet; this was an empire fuelled by meat. 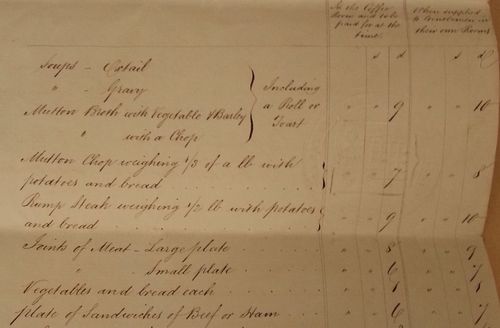 The hotel’s Indian connections were briefly revived in 1909, when Gandhi was a guest. He occupied Room 76, which according to Wyatt’s instructions to the decorators had once been the office of Sir Richard Vivian, a former military commander in Madras and a member of the Council of India. Whether Gandhi was aware of the establishment’s first tenants is not known.

In the 1920s the Westminster Palace Hotel was converted into offices and in 1974 the building was demolished. The main part of the site is now occupied by Barclays Bank.

Andrew Moseley, “An Outline of the Plan and Construction of the Westminster Palace Hotel”, Papers read at the Royal Institute of British Architects (London: RIBA, 1863)

Posted by Margaret.Makepeace at 09:00:00 in Innovation , Politics , Work