Plundered a ship of all its cargo, but want to look innocent? You could try what members of the Dashti tribe came up with when they seized a vessel laden with British goods that ran aground on the coast of Persia in 1826.

The vessel, an Arab merchant craft known as a buggalow, was bringing a cargo of linens, pepper, glass-ware and other goods from Bombay, and had almost reached her destination of Bushire in Persia, when she ran into a strong north-west wind. The captain, or nakhoda, began hugging the coast, when the buggalow struck a rock and started to take in water. Afraid that the vessel would sink, the nakhoda decided to run her aground at a place called Bordekhan in the territory of the Dashti tribe.

The crew of 38 Arabs and eight Indian passengers proceeded to go ashore in a boat, but were immediately surrounded by a party of about 300 men, who stripped them of every article of clothing and left them ‘entirely naked’. They then threatened to behead the nakhoda on the spot, unless - and this is the ingenious part - he gave them ‘a paper to the effect that his vessel by the power of the Almighty had been wrecked off that coast, and that every article on board had been lost; that he had not sustained the slightest inconvenience from the hands of the inhabitants, and that neither he nor his men had been plundered of a single article of dress’.

Using a similar threat they compelled the ‘crany’ (the ship’s writer) to put the required statement in writing, obtained the signature of the nakhoda, and forced five of his crew to witness it. The Dashtis then told them that ‘they might go about their business’ (although how, exactly, they were supposed to go about their business stark naked on the Persian coast is not clear), and immediately commenced plundering the vessel.

Five black crew members were not so lucky. The Bordekhan people seized them and retained them as slaves.

However, the Dashtis’ cunning plan failed to work, as the nakhoda went straight to the East India Company Resident at Bushire and made a full statement of what had happened. A transcript of the statement is contained in the India Office Records letter book cited below. 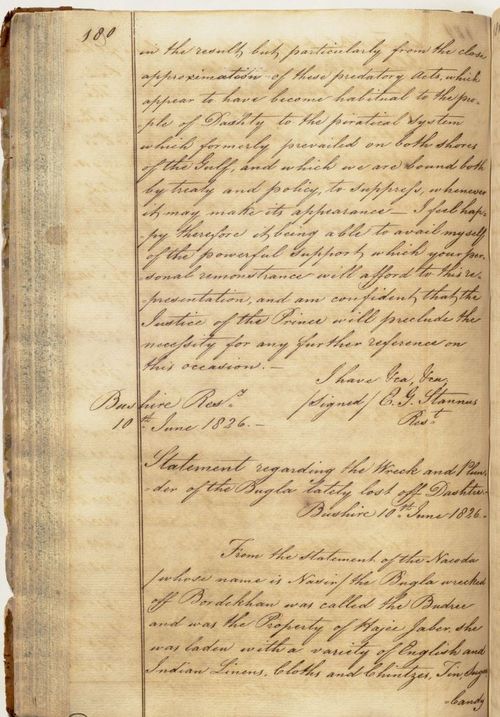 The Resident recruited the services of the British Envoy to the Court of Persia, Colonel John Macdonald, to make representations to the Persian authorities and demand the restoration of the vessel’s goods.

In reply, the Persian minister Zaki Khan was inclined to defend the actions of the Dashtis: within the preceding 22 years, over 20 vessels had been wrecked on the coast in question, in which cases it had been an ‘established custom’ for the inhabitants of the neighbourhood to take possession of all the goods contained in the ship. Rather like Cornish wreckers, the minister clearly thought that the locals were entitled to a bit of plunder. However, to preserve good relations with the British he was prepared to order the return of the goods - in exchange for a full receipt, ‘in order to prevent any further discussion’. 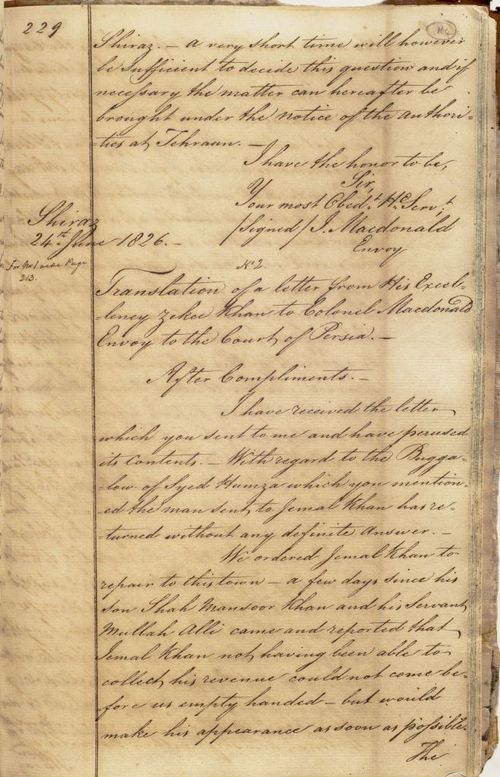 Posted by Margaret.Makepeace at 09:00:00 in Conflict , Journeys , Politics , Qatar , Slavery