We continue our look at Gandhi’s famous salt march, with a telegram from the Governor of Bombay on 20 March 1930. In it he indicates that Gandhi was raising the stakes in provoking Government action. It was reported that in his speeches “…although as usual advocating non-violence, he stated openly he had come to preach sedition and spread disloyalty”. The marchers crossed the Mahi River into Broach District on the night of 19 March. The telegram of 22 March reported that Jawaharlal Nehru had briefly joined the march, it was supposed in order that he could confer with Gandhi about a meeting of the Congress Working Committee, and after making a short speech, left for Ahmedabad. The marchers continued on through northern Broach where it was reported that no particular excitement or interest was aroused, reaching Gajera on the morning of 21 March. 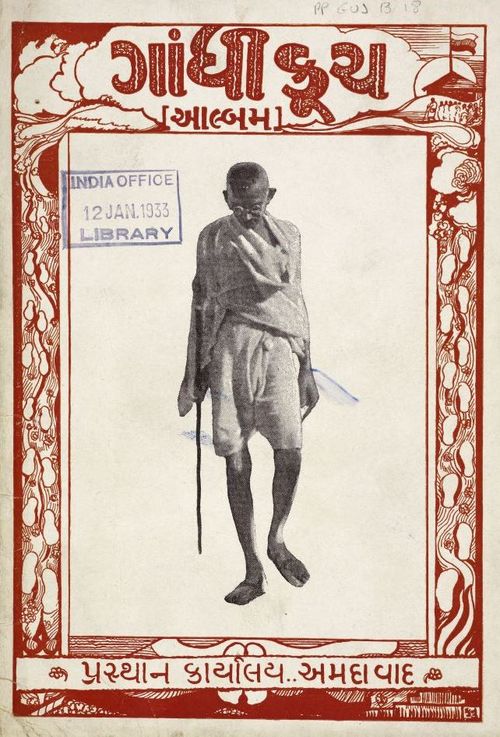 At Gajera, Gandhi addressed a meeting of 3,000 people, and caused some controversy in the crowd by introducing some untouchables. The Governor of Bombay reported on 23 March that the “Reception in Broach District continues to be lukewarm everywhere and at some places poor”. However there were reports of resignations of headmen in Surat and Kaira Districts, and a boycott of Government servants in those districts had started.

At Jambusar, on 22 March, Gandhi met with Nehru and other Congress representatives, before addressing a crowd of 5,000. The march then moved to the town of Amod, where he met leaders of the Bombay Youth League, and spoke to a crowd of 2,500 people. By the evening of the 23rd, the march had reached Samni, 14 miles from Broach, where it paused for Gandhi’s day of silence on 24 March.

Meetings took place on the 25 March at Tralsa and Derol, with the marchers reaching Broach on the morning of 26 March. They stayed at the Ashram of Doctor Chandulal Desai, described in the Bombay Governors telegram as the chief agitator of the District. The marchers crossed the Nerbudda River to Ankleshwar that evening. The Governor's telegram reported the physical strain which the march was taking on Gandhi and his supporters. There was apparently “…much sickness in the party which is said to be weary of marching”, and Gandhi appeared to be tiring. Despite his fatigue, on his arrival at Ankleshwar, Gandhi addressed a meeting of 4,000 people, which included some Muslim Parsees and Christians from the local mission.