Today is St Piran’s Day.  Celebrations take place throughout Cornwall every year on 5 March in memory of this Cornish patron saint.

St Piran was born in Ireland in the 5th century.  Legend has it that he was thrown off a cliff with a millstone round his neck in the midst of a storm.  As soon as Piran hit the sea, the waters calmed and he floated to Cornwall on the millstone, landing near Perranporth.  Piran built a small chapel there and preached Christianity to the local people.

Piran became interested in the rocks and stones along the coast.  He built a hut with a hearth made from a single slab of black stone. One night, as the fire burned with a great heat, Piran was amazed to see a stream of white metal trickling out from the hearth.  By accident Piran had discovered tin. The Cornish flag is the cross of St Piran – a white cross on a black background representing white tin flowing from dark ore. 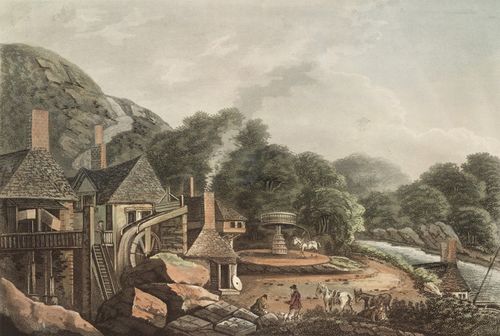 Piran shared his discovery with the local people who were delighted with this source of prosperity. Cornish tin miners adopted Piran as their patron saint and kept St Piran’s Day as a holiday of great feasting. Mine owners often paid the men sixpence or one shilling as a bonus for 5 March. The miners’ merry-making prompted the saying ‘as drunk as a Perraner’. Perhaps it is no surprise that the day after St Piran’s Day is known as ‘Mazey Day’, suggesting the befuddlement caused by carousing.

There is an annual procession at Perranporth on a Sunday in early March to remember St Piran, with participants carrying Cornish flags and armfuls of daffodils. Celebrations on 5 March are not confined to Cornwall. In 1936 the Bradford and District Cornish Association held their ninth annual meeting on St Piran’s Day and celebrated with a supper and a whist drive.  In the USA there is a pasty-tossing Olympics at which a Cornish pasty is thrown at a St Piran’s flag laid out on the ground about 200 metres away.

Further Reading:
A A Clinnick, The Story of the three churches of St. Piran (Truro, 1936)
British Newspaper Archive e.g. The Cornishman 12 March 1936
Aw! how I ded long for a tatie pasty!

Posted by Margaret.Makepeace at 09:00:00 in Journeys , Religion , Work