Thin dogs and domestic animals, expensive grain, and unemployed men wandering in search of employment ‘careless of their children and old dependants’ were signs of local scarcity in danger of developing into a famine situation, according to Moonshi Ishree Pershad, Rai Bahadoor, Deputy Collector of Muzaffarpur in North India. His testimony in response to set questions from the 1878 Bengal Famine Commission was unusual in giving an Indian’s perspective, and paints a more intimate picture of village life than that given by the majority

of the British respondents. According to Moonshi Ishree Pershad, in times of scarcity loans became difficult to obtain, the number of beggars increased, private charity was over-burdened and crimes against property gradually increased.

In rural India, the people likely to be worst affected by serious crop failure were the panch pamania who attended to secular ceremonies, including births and weddings, together with artisans such as potters and weavers, and of course labourers and cultivators. 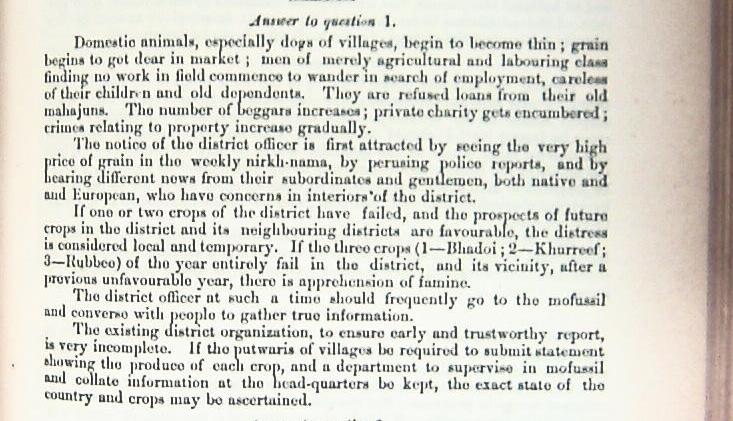 Moonshi Ishree Pershad said that the district officer would know that famine was imminent if he found that ‘Grain imported to his district is not from neighbouring districts but other provinces; that exportation from his district is altogether blocked; that cattle, gold and silver ornaments and brass utensils do not fetch one-fourth of what was paid for them; that men of high caste go in disguised state to earthworks situate at a distance from their homes, and that infants of his district have very miserable looks.’

This information was provided as part of his response to the Bengal Famine Commission’s set questions about the condition of the country and people, relief during the earliest stages of distress, famine relief and prevention.

Moonshi Ishree Pershad’s comments were informed by his experience of relief works in 1874 when the winter rice crop failed following a lack of rain and one seventh of the population was in receipt of support.

Richard Axelby and Savithri Preetha Nair Science and the Changing Environment in India: a guide to sources in the India Office Records (London, 2010)