We rejoin Gandhi’s salt march on 27 March 1930, with the party passing through Sajod, reaching Mangrol that evening. The resignations of village headmen continued, and it was reported that local agitators in Jalalpur had started a boycott of local officers at Dandi where Gandhi planned to break the salt laws. The next day Gandhi crossed into the Surat District, reaching Umrachi that evening. He addressed a gathering of 2,000 people, and reportedly took a new line in his speech “…saying that from April 6th Congress would start own programme and salt would be manufactured all over the country on that date. Women should turn their attention to picketing liquor shops”. The march continued through Erthan the next day, reaching Bhatgam by nightfall. The Governor of Bombay reported that a total of 85 headmen had resigned their positions in Surat District.

At Bhatgam, Gandhi addressed the crowd on the subject of temperance, and warned against the dangers of luxuries. The march then continued its progress to Delad, which it reached on the evening of 30 March, and Gandhi addressed a crown of 5,000 people on social subjects such as extravagance and temperance. The next day there was a halt for Gandhi’s day of silence. The march resumed on 1 April, reaching Surat City that evening, where Gandhi spoke to a large crowd of reportedly 30,000 people. The march continued the following day, crossing a portion of Baroda territory. By now, reports were reaching the Bombay Government of various parties who intended to break the salt laws in other districts, and there were further reports of boycotts of Government officers. On the evening of 4 April, Gandhi’s party reached Matvad, only 3 miles from Dandi. 140 village headmen, out of a total of 760 had reportedly resigned in Surat District. 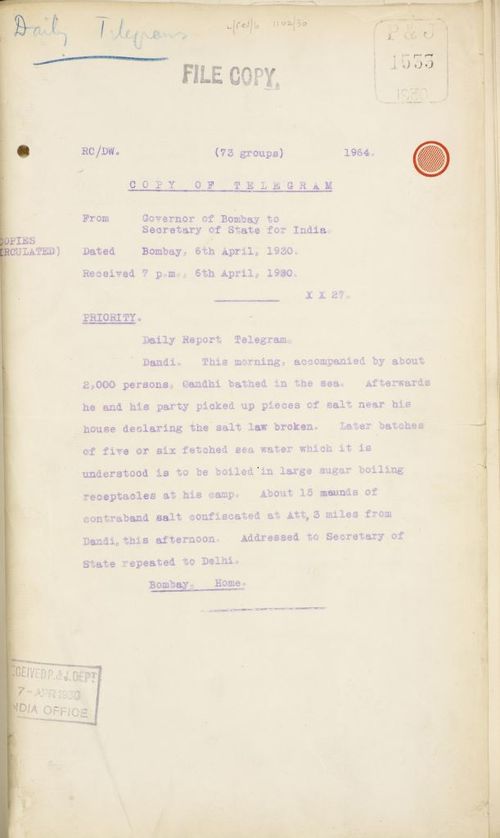 Telegram from the Governor of Bombay to the Secretary of State for India, 6 April 1930, reporting that Gandhi picked up pieces of salt at Dandi. IOR: L/PJ/6/1998.

The Bombay Governor’s telegram of 6 April reported the momentous news: “This morning, accompanied by about 2,000 persons, Gandhi bathed in the sea. Afterwards he and his party picked up pieces of salt near his house declaring the salt law broken. Later batches of five or six fetched sea water which it is understood is to be boiled in large sugar boiling receptacles at his camp”.

Gandhi continued to address large crowds and break the salt laws in the Surat District. Increasing acts of civil disobedience around the country put pressure on the Government to act, and there were widespread arrests of Indian political leaders and activists. Finally, on 5 May 1930, the Governor of Bombay sent a telegram to London reporting “Gandhi’s arrest was carried out without a hitch at 1am this morning, and he arrived at Yeravda prison in good health and spirits shortly before 11am”. 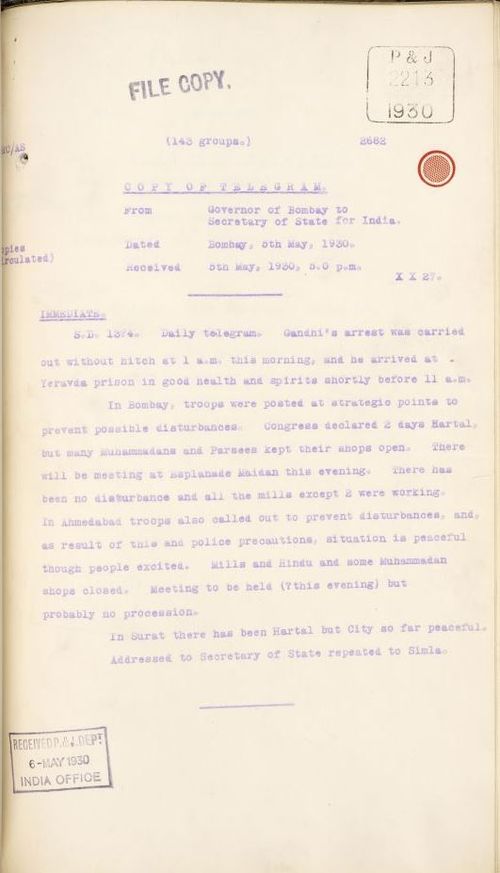 Telegram from the Governor of Bombay to the Secretary of State for India, 5 May 1930, reporting Gandhi’s arrest.
IOR: L/PJ/6/1998

Gandhi’s march had been a huge success, attracting great interest in India and around the world, and keeping the issue of Indian independence on the front page of Indian and international newspapers.