Hot cross buns are a traditional Easter treat.  They are distinguished from other buns by the flavour of all-spice and a pale cross baked into their top.  Although they now appear in the supermarkets as soon as the Christmas mince pies have been cleared, hot cross buns used to be associated particularly with Good Friday.

In the early 19th century, Good Friday and Christmas Day were the only two ‘close holidays’  observed throughout London, with shops shut and churches open.  From dawn, street sellers were busy crying ‘Hot cross buns! One-a-penny, two-a-penny, hot cross buns!’ They carried their wares in baskets, with the buns covered first by a flannel or green baize, with an outer white cloth. As customers were served in the street or at their front door, the coverings were slowly and partially removed lest the buns should cool. The ‘hot’ aspect of the buns was evidently considered more important that it is today! The sellers’ ‘volume of concerted sound, unequalled by other rivals in the ephemeral Good Friday trade’ continued until it was time for church. Bun selling then resumed in the afternoon. 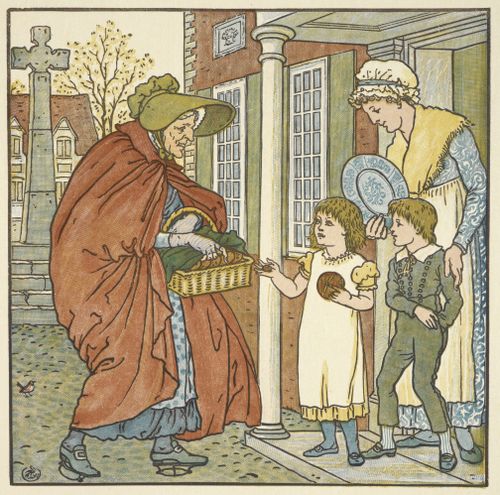 According to William Hone, the quality of hot cross buns was in decline in the 1820s as demand decreased. In the late 18th century pastry cooks and bakers had competed for excellence in making the buns, and ‘the great place of attraction for bun-eaters’ at that time were the two Chelsea ‘royal bun houses’.   Hundreds of square black tins with dozens of hot buns on each were produced for sale at Chelsea from six in the morning until the evening of Good Friday.

A Good Friday bun was sometimes kept for luck and hung from the ceiling until replaced by a fresh one the following Easter.  The hanging bun was supposed to protect the house from fire.

Not everyone was a fan of hot cross buns.  On 23 March 1826 The Morning Post published a letter from ’A Friend to Reverence’ who believed the practice of ‘crying the crossbuns’ through the streets of London and the neighbouring villages on Good Friday to be ‘irreverent and profane’.  Good Friday should not be celebrated as a day of feasting: ‘I have myself a family of little ones, who…are naturally fond of the produce of a confectioner’s shop; but I never allow of any of the cakes so marked, to be brought into my house. My motive is explained to them, and the temporary disappointment is repaired on the Easter Monday’.

The next day (Maundy Thursday) the newspaper published an opposing view: ‘I have no children to have the pleasure of giving them, to-morrow morning, as many cross buns as I would kisses.  Whatever, therefore, the origin of cross buns, the intention manifested by them is good; no argument is so powerful as that which gratifies the taste and liking of man or child; let cross buns be cried about as usual, to-morrow morning’.

Posted by Margaret.Makepeace at 09:00:00 in Domestic life , Leisure , Religion , Work