On St George’s Day we look at the lives of two appropriately named brothers who served as officers in the East India Company’s armies. Their careers were very different: one died as a young man whilst the other had a long and distinguished career.

Etienne and George St George  were the sons of Edmond St George, ‘a private gentlemen’, and his wife Mary. They were born in London in 1827 and 1830 respectively.  At the time of the 1841 census Etienne and George were boarding with their sister Louisa at the house of Mary Woodman in Westbourne Sussex.  Both boys attended Mr Roberts’s school at Eagle House in Mitcham Surrey, but by January 1845 they were in Paris.  Etienne was baptised there at the age of seventeen and there is nothing to indicate in the register entry that his father was dead.  However when Etienne passed as a cadet for the East India Company’s Bengal Army in April 1845, he said his father was dead and his mother was living at Rue de Grenelle, Paris.  Etienne was put forward for a cadetship in the Bengal Infantry by Company director Major General  Archibald Galloway on the recommendation of his aunt Miss M Barwell.

George spent the year 1845-1846 at the Institut Boniface in Paris, following a course in elementary mathematics.  He was given a good report: he was always regular in attendance, industrious and well-behaved.  In 1847 his aunt Miss Barwell secured him a nomination for the Bombay Army from director Sir James Law Lushington. George served with the 25th Regiment Native Infantry, rising to the rank of Lieutenant before his death at the age of 27 on 4 July 1858 whilst on furlough and living with Louisa at Montpelier Crescent in Brighton.  Etienne was also on leave that year. The Brighton Gazette records that he arrived at Montpelier Crescent shortly after George’s death, on 12 August 1858. 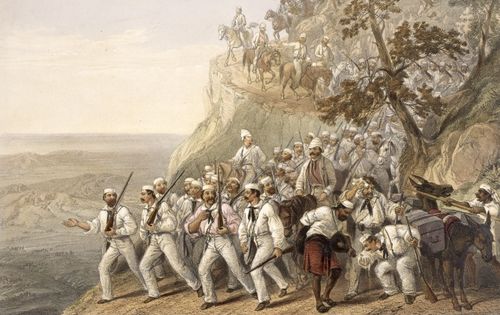 Etienne served with the 1st Bengal Fusiliers at the siege of Lucknow and was subsequently seriously wounded in action. He spent the rest of his life suffering the effects of  a bullet wound in his liver.  He rose to the rank of Colonel, ending his career as assistant secretary to the Government Legislative Department. Colonel St George retired on 1 April 1875 after 30 years’ service in the Bengal Army.

During the 1880s Etienne St George moved to New York,. In July 1891 he married Alice Lee Eldridge (née Goodrich) the widow of Frederic G Eldridge, President of the splendidly named Knickerbocker Trust Company.   Etienne died at home in New York City on 1 May 1902.  His will bequeathed his entire estate to Alice, who died on 17 August the following year. 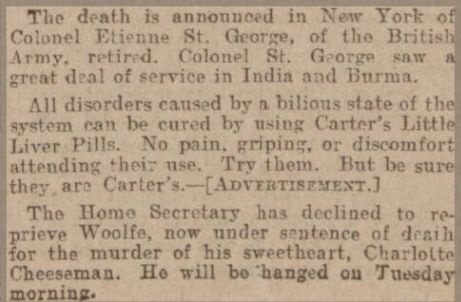 A death notice for Colonel St George was published in the Western Times,  immediately above an advertisement for Carter’s Little Liver Pills. This was unfortunate given that Etienne St George died of cirrhosis of the liver as a result of the wound he had sustained more than forty years earlier.

Posted by Margaret.Makepeace at 09:00:00 in Conflict , Domestic life , Health , Journeys